What does the name Old Colony mean? 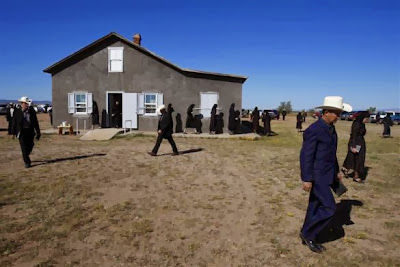 The name Old Colony Mennonites is used to describe that part of the Russian Mennonite movement that is descended from colonists who migrated from the Chortitza Colony in Russia (itself originally of Prussian origins) to settlements in Canada.

Since Chortitza was the first Mennonite settlement in Russia, it was known as the Old Colony. In the course of the 19th century the population of the Chortitza Colony multiplied, and daughter colonies were founded.

Part of the settlement moved to Canada in the 1870s, and the Canadian community, whose church was officially known as the Reinländer Mennoniten Gemeinde, was still informally known by the old name.

When members of the Old Colony Mennonites then moved from Canada to other places, the name was kept.

Old Colony Mennonites are typically more conservative than most other Russian Mennonites in North America.

As of 1990, Old Colony Mennonite communities could be found in Canada, the United State of America, Belize, Bolivia and Mexico.

Who can dine with Low German Mennonites?

LG Mennonites seem to always live by themselves shunning the material world and its influence. They appear as if they are completely self-sufficient in their own private world. LG Mennonites may not leave their darp (village/colony) very often, but they do let outsiders in.

LG Mennonites that did well with their farms would hire Mexican workers to help on the farm with jobs such as fence making, logging and herding cattle. They were paid relatively low wages but always served a hearty meal, cooked by the LG Mennonite women, who always invited workers into the home to eat; they was always meddach (lunch) at noon and faspa (coffee and pastries) a traditional Mennonite light meal between lunch and supper, around mid-afternoon.

It was a sin to eat at the same table with a Low German Mennonite person, who was shunned/excommunicated. They had to eat by themselves in the kumma (cold cellar) where the preserves were kept. It always smelled like sour milk down there.

I remember wondering why it was so sinful to wave at Mexican boys but it was okay to eat at the same table with them.  I was afraid to look them in the eyes; I would just look at their hands – they were so brown compared to ours.

I often wondered how the Mexicans were interviewed for work. “You will work the jobs I assign you, and you will eat with us,” our fathers might say. “But if I catch you acting inappropriately towards my daughters in any way, shape or form, you will get to know this Mennonite op oldiash!” – which means a weekday Mennonite, who was in a serious mood, as opposed to a sundiasha Mennonite, the more forgiving Sunday type neither the children nor the Mexicans ever really knew what would happen if we interacted. And in our darp (village/colony) we never found out.

What in the Name?

Why do Low German Mennonites all have the same names?

It was rare that parents would name their child a name that had not been in the family before.  The average couple would have twelve children and each child would be named according to tradition.  Most of them would live in the same colony as the parents and grandparents.

This recipe populates Mennonite colonies with far too many Abes.

What’s with the socks and sandals?

At first, socks and sandals had nothing to do with style.  Most people had only one pair of sandals for work and one or two pairs of shoes for church.  But in Mexico it gets cold in the evening during the winter months so we put socks on to keep our feet warm.

We used to always wear pantyhose until some brave women wore white socks with black sandals on a Sunday afternoon.  Soon all the girls were doing it.  All of the sudden, it was so popular that some girls had bows, lace and glow in the dark bright colors and before anyone knew what happened it was the hottest new trend.

We were not allowed to shave our legs back then.  We would put on the light skin coloured pantyhose and put the short socks over them so it looked like we had nicely smooth shaved legs.  This was okay for a while and then the elders were worried that change was happening and that was not okay and they had to put a stop to it.

Parents were told not to let their daughters wear them and so we stopped wearing them during the day time.  We kept wearing them at night.  During the day it was back to dark brown pantyhose or knee length socks.

The lighter the colour was, the more complaints we would get.  The preacher began speaking in church about how important it was not to change the way we dressed, including the way we dress our feet.

How you dress your feet during the week was not as big of a deal as on Sundays.  During the week people mostly work at home and on their farms where no one would really see you.  Sunday was when you were expected to dress appropriately and represent our people/culture.

When LG Mennonites come to Canada, they find no one cares anymore about sock colours.  And so the women go nuts with their socks and sandals, because it is cold after all and now they are allowed to wear them.

In Mexico it’s not as important as it used to be, even though the times have slightly changed.  Women usually still wear pantyhose on Sundays.

These days I see a lot of women in Hollywood wearing socks and sandals, like in the picture to the right.  Nowadays I follow the North American style, which is not quite the same as the Mexican style, pictured below.