“So tell me, Anna, do you have any plans for your birthday yet?” George asked.

“I sure do. I am going to finish a whole workbook so I can hand it to my teacher on Monday morning and start the next one on Monday night.”

“Holy! Slow down. I think you still need to have some fun on the side or you’re going to finish school in a month. I know you are ambitious and anxious to get things done but you are only turning twenty once. Your birthday won’t be on a Friday the thirteenth again until 2002 when you will turn twenty-six. You know that doesn’t just happen to everybody, right? And if you keep this up you will be off to some university by then.”

“Since I never got a chance to answer the question about whether I would take you on a motorcycle ride, can I ask you a more important question? Would you even want to go?” he asked.

“Well, I had lots of time to think about what it might be like, and yes, I think I would like to go, if you want to take me,” I answered.

“Okay, it’s settled then. After school on Friday come to my place and I will go over some things with you before we go. You will have to wear pants, you know that, right?”

He looked at me with his head tilted and one eyebrow raised. I couldn’t keep straight face for long and I burst out laughing.

Just thinking about it gave me the butterflies. I was so excited I forgot all about Mark.

On Thursday right after school I went to the walk-in clinic and got a couple of needles that were to protect me from some strange disease I had never heard of. The nurse told me that everyone who lives in Canada has to get them, and since I lived in Canada now, I had to get them too.

She asked about school and how it was going. She was so happy to hear that I was doing alright.

“I think they haven’t figured out what level I am at, because they know I have a learning disability,” I said.

“You do not have a learning disability, Anna. Everyone learns in different ways and you just haven’t had a chance to learn how you learn. You are really smart.”

I wasn’t sure how to respond to that, I just loved the sound of her voice telling me exactly what I needed to hear in exactly the right way.

“If anyone ever tells you that you have a learning disability again, do me a favor and just ignore them. I am friends with many of the teachers at that school and your teacher is really impressed with the progress you have made in such a short time,” she said.

My eyes started to water when I realized that she was the first person to ever say that I was smart. When I was ready to go, I gave her a hug and said, “Thank you for everything you have done for me. If you wouldn’t have said ‘why don’t you go on Tuesday?’ and called the school to let them know I was coming, I probably wouldn’t have started going to school yet.”

“Any time, Anna. From the first day I met you, I knew if I could just get you into that school that’s all it would take and the rest would be history. Have a wonderful birthday and call if you need anything.”

I asked her if she would have something for my headaches and she gave me a bottle of Tylenol.

“Thank you so much, I don’t know what I would do without you,” I said.

“The good thing is you don’t have to do without me. You can call me anytime you feel like it. Take care of yourself.”

When I got home I took a Tylenol and did my homework. I wrote about the best nurse I had ever met in my journal. I tried on the new-to-me jeans, ankle boots, and the jacket that Bree had brought me. It all fit me like it was made for me. I was so excited to wear it the next day to go on the motorcycle ride with George.

I lay in bed and said my last nighttime prayer as a nineteen-year-old, thinking about being sad about it, but I wasn’t. I was happy that those nineteen years were over. I had a feeling that things wouldn’t get easier anytime soon but I had high hopes that I would at least get a bit better at handling it.

Friday the thirteenth, I woke up early and feeling lucky to be alive and that I had made it to twenty. There were many times I thought that I wouldn’t. I was starting to look forward to going to school.

I had an hour before I had to be at school. I decided to paint my toenails and fingernails pink. I figured I could because George told me that this was a very special birthday and that would make me feel special.

“Happy birthday!” my teacher said as soon as I walked through the door at school. At the first break the principal brought cupcakes into the classroom and I felt a little embarrassed -- I had never gotten that much attention on any day before. I reminded myself to try and just enjoy it more than I was.

At the end of the day, I hurried home and put my dark blue Guess jeans with sparkly back pockets on and a white V-neck tee-shirt that said Guess in sparkly letters on the front of it. I put my ankle boots on.

I wasn’t sure what to do with my hair so I just put it into a bun. I put on some pink lip gloss and I was ready. While walking to George’s apartment my stomach hurt -- that is how nervous and excited I was.

When I walked into George’s apartment he looked relieved when he saw how I had dressed. I had surprised him so many times with the way I dressed. I imagined him being worried about it. He had no idea how I might show up ‘ready’ for a motorcycle ride.

“Only one thing though, that bun won’t fit into the helmet and you don’t want to leave it open either because it will get all twisted with knots and stuff. I think you need a French braid,” he said. 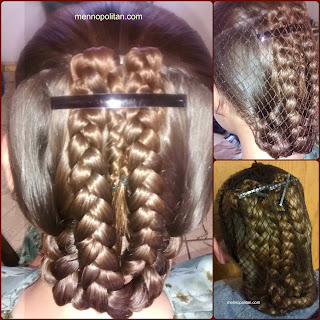 “A French braid, what is that? How is it different from dietscha ssoppen?” (Mennonite braids.)

“You have never seen a French braid?”

“I could put your hair into a French braid.”

“You know how to make ssoppen?”

“I’m guessing when you say ssoppen you mean braids, and yes I do. Have a seat on my tattooing chair so I can turn your hair into soapmmmn or however the heck you say that.”

I giggled as I walked over, took my jacket off, and sat down in the chair. I hadn’t thought of how strange It was until I sat in George’s tattooing chair and realized that a man was about to braid my hair. That was such a foreign concept. Such a thing had never crossed my English, Spanish, or Low German thoughts before.

I thought, “Okay, I’ve got to see this. I don’t think he can actually do this, he’s probably just messing with me and my hair might be blue when he is done.”

I was facing a window. I could see him coming toward me in the reflection. He had a big smile on his face. I closed my eyes and held my breath as he slowly pulled my hair out of the bun. I felt warm shivers going all the way down to my toes.

I took a deep breath as he began by parting my hair on the top of my head. He pulled out a few strands on each side to leave out and continued to part strands of my hair and started braiding. He was so careful that he wouldn’t pull too hard. Once in a while, I felt his hand touch the skin on the back of my neck and every time I felt goosebumps forming on the bottom of my toes. 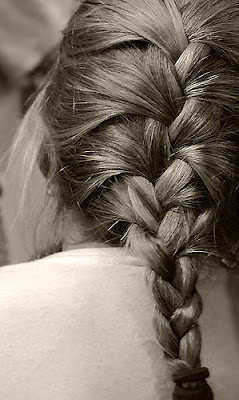 All I could think about was, “I can’t believe this is happening.”

I felt so weak in my knees I had a hard time getting off the chair. He noticed and gave me a hand and winked at me as he helped me down.

I thought “Oba, how and the schistjat am I going to make it through this?”

He handed me a mirror and said, “Come with me, I’ll show you how you can see the back.”

I followed him to the bathroom and he positioned a mirror so I could see it from the back. When I saw my new braids I was shocked and impressed that he had such good ssoppen-making skills.

George went to a closet and grabbed two helmets, handed one to me, and said, “Here, try this one on and see how it fits.”

I picked it up. It smelled just like George as it slid right over my French braid. He checked it and said, “looks good, Anna.”

He picked up his helmet and rested it against his hip as he looked at me with his head tilted with one eyebrow raised and said, “Ready?”

“Okay then, let’s do this,” he said. Click here to continue reading my story.