I kept going back to the Job Finding Club for something to do. Kim typed up a resume for me but it had very little writing on it. When I first started coming, I didn’t even know what a resume was and now I had my very own. I felt so proud of my first resume.

Mark, the man that sat beside me felt sorry for me and began calling me to try and help but, really, there was nothing anyone could do. There was no job out there for me. It was ridiculously clear that I should be going to school.

Mark encouraged me to just keep coming to the club and I did. While looking through the classified job ads of the local newspaper, Mark read an add of an embroidery shop that was looking to hire experienced sewers. I got all excited and thought that that could be the break I had been hoping for.

Everyone at the club dropped what they were working on and practiced interviewing me.  My head was spinning. I had never been asked that many questions about myself. “What is your greatest strength?” “What is your weakness?”  “Where do you see yourself in five years?”

All I could think of was, “It is so hot and stuffy in this room that it’s hard to breathe.” I was wearing a long-sleeved dark-colored dress that went up to my neck and below my knees as well as socks. All I could think about was how nice it would be to be able to wear shorts and a white t-shirt and take these socks off. But, I was afraid that a Low German person would see me and tell my mom in Mexico, and then I would be in big trouble.

Kim had faxed my resume to that embroidery place and, sure enough, they called me the next day to come for an interview. Kim drove me to the interview and tried to keep me calm on the way there but it wasn’t working.  I was anything but calm. I walked in and there were ten people waiting to be interviewed. I thought, “Oh crap! I don’t have a fighting chance against these people.” They all looked so confident.

I thought I should have put on shorts that day, just for the day, so I would blend in a little more but, nope, I couldn’t risk it. So there I was in my dress, socks, and sandals and people were staring at me again. A very large woman was wearing really short shorts and a low cut tee-shirt. You could see most of her mountains. I had a hard time focusing on what she was saying.

She said, “Thank you all for coming. We had a really rough start this morning. The boss is sick and for that reason, she couldn’t make it in, then our air conditioner broke, so please bear with me.”

I began to wonder where they were keeping this bear she talked about. I was hoping it wouldn’t come into the room while I was there. I heard that there were bears in Canada but I had no idea that they would keep them at an embroidery shop.

I was sweating like I never had before, not even in Mexico. It was so hot in there but we all stayed in that room as she began asking questions. I just smiled, nodded my head as everyone else was asking and answering the questions. I wondered if I should say, “I had a SIN card.” But I didn’t.  I thought if I didn’t say anything I would have a better chance of getting the job. And if I got the job then I could prove it to them that I could be a hard worker.

She told us that the job paid eight dollars an hour, which was fifty cents more than I was getting at the factory where I had worked. I thought that was awesome and really hoped that I would get the job.

For a while, the woman paid close attention to how we interacted and responded to each other and then she said, “Okay, thank you all for coming and you will hear from us before the end of the week.”

Kim came back to pick me up with an air-conditioned car and a nice cold seven-up. She was the nicest person I had met in Canada, for sure! I was so happy and tempted to hug her, I had seen people do that on TV when they were feeling happy like I was. But I didn’t because I was way too sweaty and I wasn’t used to hugging people. Low German people didn’t hug. My Low German thoughts scolded me, “What are you thinking Anna? schäm de!”

When we got back to the club Kim said, “Let’s give Anna a big round of applause. She is the first out of this group to get an interview.”

I turned red like a tomato again. I wasn’t used to getting attention like that. Mark was so happy for me, he gave me a hug. It was awkward, nice, and weird all at the same time. I felt like he was getting a bit too friendly toward me, but I thought, “what do I know about friendships anyways, let alone friendships between men and women?” Click here to continue reading my story. 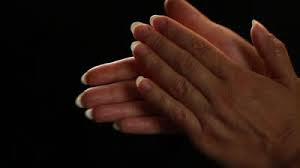 Email ThisBlogThis!Share to TwitterShare to FacebookShare to Pinterest
Labels: Menno-applause, My Story