Life is so complex here!

I hurried through the door to go tell George and almost smashed right into him. He was already standing outside my door, just about to knock. With a big smile on his face, he asked, “Ready to go?”

While walking beside him to the car, I had heart pounding thoughts about all the “what ifs” but, as soon as I started the car, I felt butterflies in my stomach. Sitting in the driver’s seat calmed me down every time.

I loved driving. It was the only time I felt in control. I found it strange that George didn’t have a car. I wondered, “Why would someone who was allowed to have a car not have one?” As I was driving, I asked him why he didn’t have a car and he said, “I can’t be bothered with cars. Keeping up the maintenance and insurance is way too expensive.”

“I have a Harley that I store at my buddy’s house and I’d much rather spend my time and money on her than a stupid car that breaks down all the time. Speaking of insurance, I’ve been meaning to ask you: Did your cousin tell you where to look for the insurance on this car? You might want to know in case you get pulled over.”

I thought, “What? He has a girlfriend named Harley? That almost sounds like Hilary and he stores her at his buddy’s house? I’m not sure how I feel about that. He must not understand how cars work because this one is not expensive at all. It still has gas in it from when Izaak left it here.”

I wasn’t sure what those big words meant but Izaak’s car drove just fine without any of what George was talking about.

I thought, “I’ll figure all this out another time. This is way too much for today and, next time, I won’t ask questions like that.”

My heart started pounding again as I pulled up to a variety store that George told me to drive to. We walked in toward an ATM machine where a woman stood waiting for me and said, “Anna?” with a confused look on her face when she saw that George was with me.

She started talking to me, but I couldn’t understand a word she said. She had a really heavy accent. I took the envelope she handed to me and said, “Thank you.”

George gave her a strange look and said, “I trust that I won’t have to call you again about this.” He put his arm around my neck and said, “Let’s get out of here,” as he guided me out of the store.

He opened the driver’s side door for me and waited for me to get in so he could close it. As I sat there while he walked around to get in, I felt like I had just done something really bad. He looked over at me and realized that I needed a minute to process what just happened and asked, “Anna, are you okay?”

I giggled and said, “I think so, just give me a minute.”

I took a bit longer than a minute and thought of a time when I was fourteen. I was with my older sister, who was waiting for her boyfriend at the gate of our property line on a Sunday evening. The buggy arrived with her boyfriend and a bunch of guys that came along looking for girlfriends.

One of them came over to me, put his arm around my neck, and just assumed from that moment on that I was his girlfriend. He came to visit me every Sunday for a year and a half until I finally worked up the nerve to tell him not to come anymore.

He was a nice man, with a drinking habit like most of the men. He was about an inch shorter than me and I wasn’t done growing yet. It was a perfectly normal way this would happen in my colony. I just couldn’t accept him as my future husband. I told my friends that I was going to give him “kjeep”, which means breaking up with him.

My sister and all my friends advised me against it. They all said, “Why would you do that? You should be grateful that there is one that wants to marry you. What if you give him kjeep and you will be alone forever?”

Most of them were worried about that because no one had come for them yet.

I wasn’t attracted to him but that shouldn’t have mattered. Most of us didn’t even know what that was. There might have been a few lucky people that that happened to, but there wasn’t a lot of room for that when all we worried about was accepting the first guy that showed an interest in us. How would we ever know?

Sometimes, when I got to go to Patos (Mexican town) on a bus, I would see a Mexican couple that would be so passionately into each other. I often dreamed of it being like that for us Mennonites and wondered what it would be like.

It may have happened to some from the colony but you wouldn’t really know if it did because Mennonite couples wouldn’t show their affection for each other like the Mexicans did. Mennonite passion was just different and I thought it was a bit one-sided.

But, then again, I had nerve problems and saw the world in a whole different way than most of my friends did. The topic would always end up with a conversation that would go like this: “This is who we are and how we do things. We can’t change it, so why even dream about it being different when we could never change it anyway?”

I was worried and wondered what it meant in Canada when someone put their arm around your neck. I was really hoping that it wouldn’t lead to an impossible decision-making situation for me again.

As he put his fingers through his hair and laughed, he said, “I think what she said was a load of crap. They just didn’t want to pay you and they didn’t expect anyone to stick up for you.”

“I’m glad you understood what she said because I have no idea. I didn’t understand a word. Thanks for doing this,” I told him.

“Don’t mention it, sweetie, it was my pleasure. I enjoyed that. Did you see the look on her face when she saw that I came with you? She almost fell over. She was probably thinking, ‘What the heck is this badass man doing with a Mennonite girl?’ But that’s okay. I am used to it.”

“Most people I meet assume I’m a badass because of my tattoos, long hair, and my vocabulary doesn’t help that's for sure. But, I don’t give a shit what people think of me. We can’t control what people think anyway. Okay, enough about that, let’s go to your appointment and freak out some more people,” he said.

I drove to the clinic, parked the car, and took off my seatbelt really slowly. My heart was beating so fast that I was starting to feel a bit lightheaded. I thought, “I’m not sure how much more of this I can handle.”

George went ahead of me so he could get the door for me. We walked into the waiting area and I sat down. Then George sat down right beside me, so close that he almost touched me. I wished that he would sit across from me instead. Then, if someone saw me, they wouldn’t think he was my boyfriend.

George noticed how nervous I was when he saw that my knees were starting to shake. He said, “Anna, just take a few deep breaths, and don’t worry so much. I’m sure there is nothing wrong with you. You have lived in a bubble until you came to Canada and now you are just experiencing so much all at once. I am sure that’s all it is.” 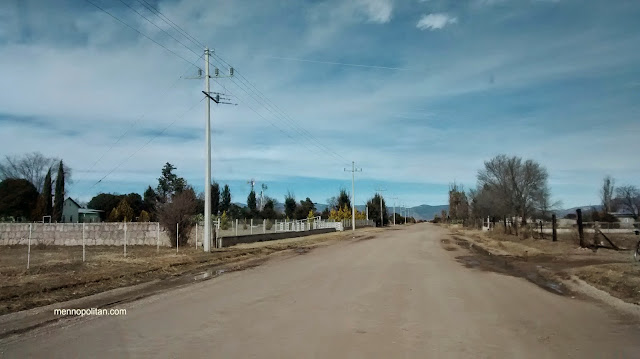 I thought, “A bubble? He obviously doesn’t know how big the colony is where I came from. It was not a bubble at all! There was so much land and open space around us. You could see the mountains all the way to Santiago. And Santiago was so far away you could never go there with a horse and buggy and that is a lot bigger than a bubble, George! But I will just keep this to myself and let him think I lived in a bubble. If I try to explain it to him, he won’t get it anyways.”

The receptionist came over and said, “Anna, you never filled out your health history form. Maybe your friend can help you?”

I had tried to do it the last time I was there but I had no idea what to do with it. I couldn’t read any of it.

George took the papers and a pen and started asking me all kinds of questions. I had no idea what they meant. He began to explain each question in plain English and finally, we were getting somewhere. George handed the papers back to me and showed me where I was to sign my name. I was so embarrassed and I hated it. I had only written my name a few times before that.

“Why do you have to sign your name so often in Canada?” I asked George.

He said, “Well, because it is a big part of life here in Canada and that is why everybody goes to school to learn all this. I don’t know how anybody survives, not knowing how to read and write. It is pretty much impossible here.”

I just sat there in silence for a while as I thought about what George said.

“I know this can’t be easy for you, but have you thought any more about going to school? You really need to go to school. Pretty much every place you go, you will need to know how to read and write,” he explained.

“Even if Hilary calls you to come back to work at the factory, there are no guarantees that you won’t get laid off again. It might be hard at first but it will get easier as you learn more about how things work here. This will never get easier for you if you don’t. It will only get harder. I guarantee it,” George said.

My head was spinning before but, after everything he said, it was really spinning now! The idea of going to school frightened me to death. My Low German thoughts were resisting the idea, but his point was starting to sink in deep.

I heard the door open, looked up, and saw a pregnant Low German lady with nine kids walking in. She looked right at me, then George, then me again, and looked down quickly before making eye contact with George.

I thought, “ha li dietschjott! (Holy crap!) Of course, this would happen and I am an idiot for thinking that it wouldn’t!” Click here to continue reading my story.

Email ThisBlogThis!Share to TwitterShare to FacebookShare to Pinterest
Labels: Life is so complex here!, My Story The Mennonite passion