Continued from Transforming Fear into Action

I woke to the sound of someone knocking on my door. I got up and tip-toed to the door to see who it was and there stood George with a TV in his arms.

I opened the door, he walked in, put the TV down and said, “The landlord was getting rid of this and I thought you might like it.”

He plugged it in and fiddled around with it for a while. He said, “I thought since the cable is included in our rent, it’s such a waste for you not to have a TV that can actually be connected to the cable.”

“You mean the cable you just plugged in?” I asked.

“No,” he said and explained what cable was, how many channels I had, and that there was even a Spanish channel included in the package.

He turned it on, put it to the Spanish channel and to my amazement it worked. I was completely thrilled about it. I wanted to hug him again but, instead, I just said, “Thank you.”

“So, how was your first day of school? What do you think about it?” George asked.

“It was hard. Learning all that English gave me a nasty headache but it went okay. I think I will be able to do this but it’s going to take me forever” I replied.

“I don’t think so. You are way too ambitious” he said.

I thought, “What am I?” I asked if he could show me how to find the word ‘ambitious’ in the dictionary.

I got my dictionary out and he wrote down the word and showed me step by step in alphabetical order how to find the word in the dictionary.

“So, first I have to know how to spell the word before I can find it in the dictionary?”

“Ay, caramba! I’m in so much trouble” I replied.

“No, Anna, don’t say that. If you practice with the words you write down in class it will get easier, even if you are not sure how to spell something. You should still look it up and that word will most likely be close to the word you are trying to find and it will be on that or the next page,” he explained.

“You should give yourself a bit more credit, Anna. You actually know more than you think. It will be a lot of work but if you take it one word and one day at a time, and before you know it you will be well on your way,” he said.

“You really think so?” I asked.

“Wow, you are right. That sounds so amazing! I have so much that I want to learn about,” I replied.

The Mexican news came on the TV and they were talking about the nuevo peso (new peso) and how people were still having a hard time getting used to it. I said, “No way, I didn’t know about that. That is interesting.”

“You can understand all that gibberish?” George asked.

“Yes, well, enough to know what they are talking about. I am not sure what ‘gibberish’ means but it sounds like a word I would use to describe English when you guys talk really fast,” I said.

He laughed as he said, “Awesome! This will help you stay informed about what is happening where your family is. I better get going so you can do your homework.”

“George, before you go can you write down the word ‘gibberish’ for me?” I asked. He laughed and said, “Sure, but this one isn't in the dictionary, yet,” and still wrote it down in my notebook.

I thought, “I need to be well informed on the commonly used English words so it won’t turn into a  ´schmuck´ story all over again.”

George left and I made myself a bean and tweeback sandwich with salsa on it. I sat down to watch more news but it was over and a telenovela came on. I was so happy and thought, “This is great! I can learn more Spanish in case I ever go home and visit my family. I will have to know how to speak Spanish well enough to get by.”

I had a hard time falling asleep again. All I could think of was that not one person has said that I was a hard learner like I was in Mexico. “George thinks I am ambitious and my teacher thinks I don’t even need ESL.”

My Low German thoughts were telling me, “They will probably notice that when the real learning begins. This is just the beginning so don’t get all excited that you will actually learn, Anna.”

The next morning when I woke up I couldn’t help but feel excited about school. I went even earlier. I was the first one there. My teacher came soon after I arrived.

She said, “Good to see you here early, Anna. I’m so glad you came back.”

“I think I can do this” I replied.

I told her that my friend taught me how to use a dictionary and I asked her if she knew where I could find a Spanish-English one. 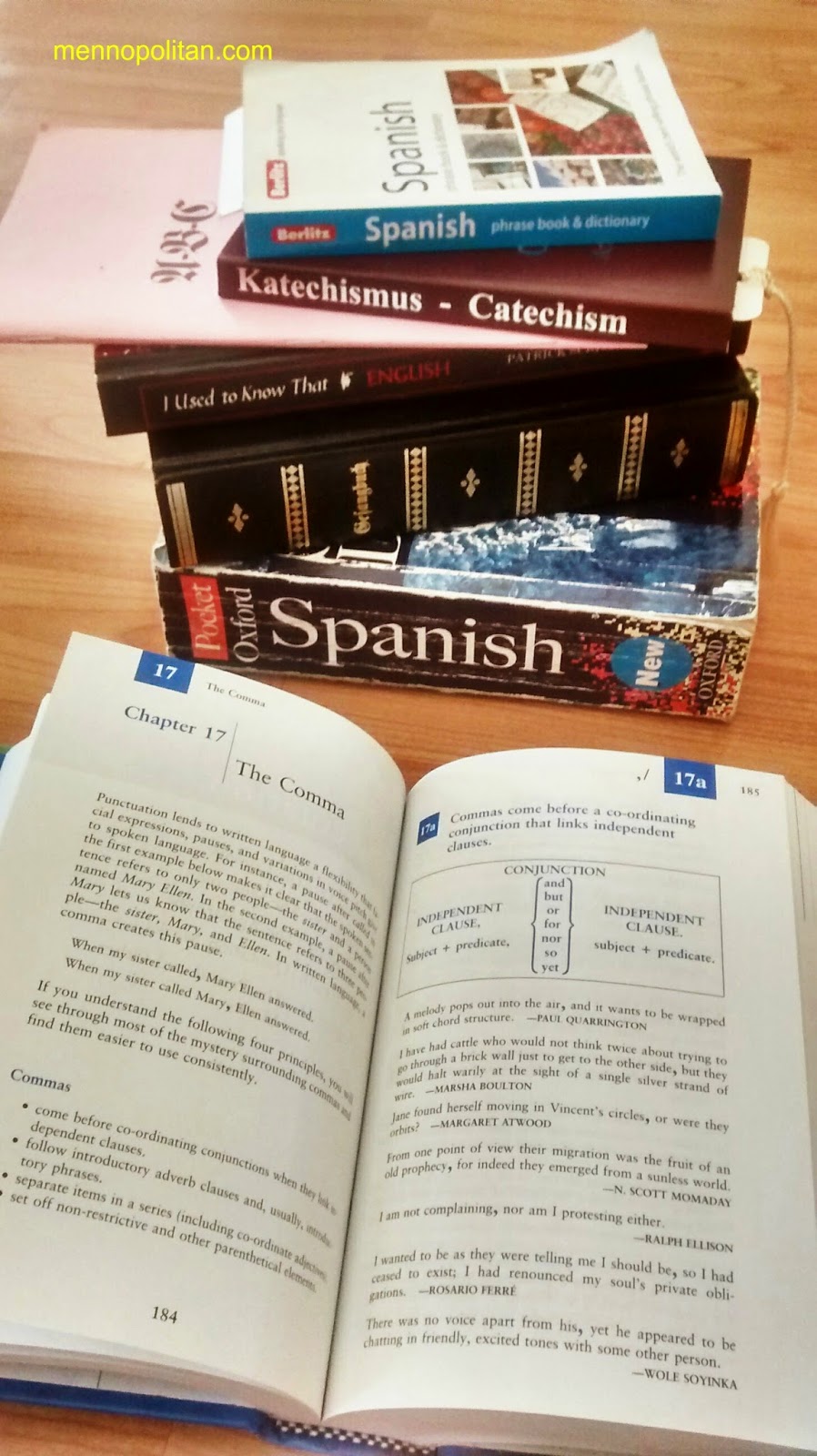 “We actually do have some here in the school library. I will go get one for you if you think that will help. I didn’t realize you know Spanish. I thought you only spoke Low German.”

I told her that I had a hard time with the High German in the Mennonite school I went to. I never learned it but I read some Spanish books and, even though I didn’t really speak it, it was easier for me than the High German.

“So you speak Low German but in your school, you only read High German and that was too hard for you so you learned how to read Spanish on your own?”

“Yes, well, I did have a great teacher. Her name was Irma and she was our neighbour in Mexico. She only spoke Spanish. While we played she taught me the letter sounds and the Spanish alphabet,” I explained.

“Wow, that is incredible!”

While the teacher went to look for the dictionary the male Chinese student came into the classroom.

“So what country did you come from and how long have you been in Canada?” he asked.

“I came about three years ago, from Mexico.” 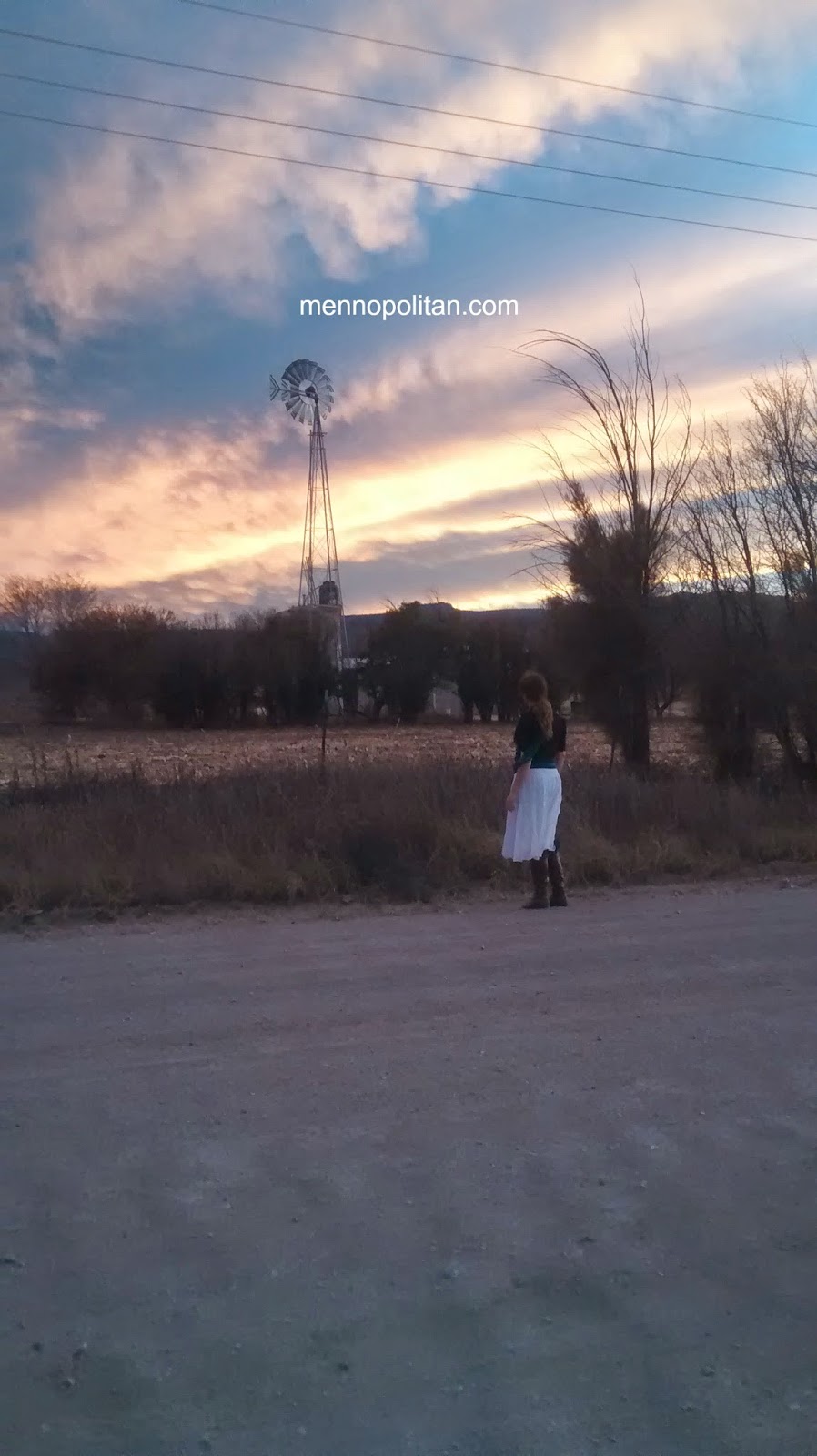 “What? You are Mexican? Wow, you do not look Mexican at all. I would say you look a bit more European than Mexican” he replied.

I thought, “European? What the heck is that?” and tried to explain it to him.

“White, Low German-speaking Mennonites live in Mexico? How does that happen? I have never heard of that before,” he said.

“Well, I have no idea how this happened,” I replied.

“That would almost be like Chinese Mennonites living in Iraq or Africa” and we both laughed as more students came into the classroom.

“What’s so funny?” asked a student.

The teacher came back and handed me a brand new Spanish-English dictionary. When I picked it up I felt butterflies in my stomach and thought, “This is going to change everything. With what George taught me last night and this, I am going to spend every minute I have looking up words. I am never going to be bored again.”

The teacher wrote the words of the day on the wall and said, “Before you start these ones we will do a dictation of the words from yesterday.”

Chung noticed I looked confused so he explained it to me. I started writing like the rest of the students and I actually spelled one word correctly. I was so excited and thought, “Tonight I am going to work hard to memorize these words for tomorrow.”

Memorizing written text I didn’t understand was actually something I was very familiar with. That was all I did in my school back home.

When it was time to do the newspaper articles again and whenever there was a word I didn’t understand, instead of asking someone to help me, I looked it up in the Spanish-English dictionary.

I figured out that it might help if I sounded an English word out in Spanish. That way I could hear the sound of every letter in the word, which was not the case in the English words. It was like a light bulb lit up in my head. It shone so brightly that my face turned red on the outside. Click here to continue reading my story.