Continued from A Mennonite's Broken Dream 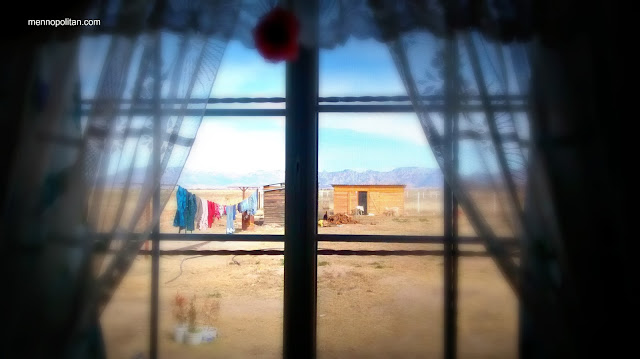 I woke up feeling like I had gotten hit on the head with a sack of beans that knocked me back into reality. I was so disappointed that I woke up. I really wanted to go to Mexico City with George on his motorcycle.

I thought about how my roots were pulling me back to my family and my birth country in my dreams. Even though I had wished a few times that my mom would just cut me loose and forget about me, because in a way that would have just made it easier for both of us.

I thought, “I really hope that someday after I figure myself out I can still take part in the family functions -- that my family would let me be there, however, I turned out.” I decided to put away those thoughts, for the time being, get up, go to school, and continue to do what I had started.

I was beginning to enjoy school and everything about it. I had forgotten about what level I might have been. It didn’t matter to anyone else so I stopped thinking about it and just continued moving forward. I really enjoyed talking to Chung and Steve about who had embarrassed ourselves the most.

Steve was winning the round with smashing his face into a post because he was staring at me. Talking about embarrassing moments was a favorite topic at the table during lunch break. I loved it because I was able to forget about everything I was dealing with and just enjoy life for a while each day.

When we got back to class, my teacher said, “Anna, your boyfriend called -- he wanted to know if you were at school today.”

My heart stopped for a moment as I felt my blood rush to my feet and turned white as I asked, “Really, my boyfriend? What did you tell him?”

“I told him that I couldn’t give him that information and he got all mad and called me a stupid bitch. He promised that I would regret this. He sure doesn’t sound like a very nice boyfriend, Anna. Would you like to tell me about it?” she asked.

“He is not my boyfriend. He has been stalking me for a long time now. He's been leaving me nasty messages and the other day he had hung a bag of candy on the side mirror of my cousin’s car that I have been driving.”

“Anna, you need to call the police, this is not okay,” she said, and she gave me the phone number for the local police station.

That night at work I was wracking my brain, thinking of what to say to the police. I just couldn’t come up with what I thought were the right things to say. I decided that I would just do it if he called, left candy, or did anything like that more time. Or I would call the police the next day.

When I got home from work there was a message on my answering machine from him. “I am getting so f#cking pissed off at you, Anna. Are you stupid? What the hell is wrong with you? Why won’t you just f#cking call me back?”

I started shaking as I listened to the message. I couldn’t believe what I was hearing. I saved that message and thought, “I just need to stop making excuses about why I can’t call the police.”

Calling the police was such a foreign thing to me. I didn't know if I could trust the police because in Mexico I knew you couldn't always rely on the police for help, especially in situations like these. I just didn’t know how to explain what was happening and I talked myself out of calling the police again. I thought, “I can’t call the police at eleven-thirty at night. They are probably closed anyway.”

I decided that the best thing to do would be to go to the police station on Saturday morning. I could hold off one more day and maybe I would ask George to come with me and help me explain it to the police.

I couldn’t sleep much that night. I woke up feeling sick that Friday morning. I got ready and went to school anyway. I was still shaken up by the message from Mark. When I got to school my teacher asked if I had called the police yet, and I said, “No, I just don’t know how to explain this to them. I think it would be better if I talked to them in person.”

“Okay, but the sooner the better. He needs to be put in his place before it gets worse.”

Driving to work I thought, “At the first break, I will call George, tell him my plan. I will ask him if he would come with me to the police station and help me explain the whole situation.”

I was a nervous wreck, walking to my sewing station at the start of my shift. I was eager for it to be over. Shortly after my shift started, one of the supervisors came and told me that my boyfriend was demanding to talk to me.

He laughed and asked, “How many boyfriends do you have? This one was Mark something, anyway. I told him you could call him back at break time.” He rolled his eyes and shook his head as he walked away laughing.

I thought, “Oh great! While he is enjoying himself, I’ve got to figure out what heck I’m going to do.”

I sat down, put my elbows on the table, rested my forehead in my palms, and closed my eyes. So many thoughts were going through my mind.

“What if the police do the same thing, just laugh at me if they misunderstand me because I don’t speak English well? What if they tell me to go back to Mexico like the people at the bank did when I didn’t know that I needed to have a SIN card to open a bank account? What if I will have to go to jail? If I would have just called him back, maybe he wouldn’t be so mad at me. This is all my fault. I should have just called him back.”

I got so scared I started shaking. Then I heard footsteps coming toward me, and a deeper voice than Hilary’s that I had never heard before said, “Anna Wall?”

I looked up -- way up. There stood a really tall police officer with a mad, serious face. I felt my face turning white and my body getting cold as I said, “Yes,” and slowly rose up from the chair.

“Ma’am, you need to come with me right now.”

My heart stopped and my whole body started shaking as I put one foot in front of the other. I followed him to the front door while everyone stopped working and just watched what was happening.

“Ma’am, let’s go outside. I need to speak with you.” I continued to follow the blue giant outside. There were about five fire trucks, an ambulance, and a lot of police cars.

Hilary looked really worried as he came out with the rest of the workers and all I could think about was, “What the heck is going on?”

A police officer was talking to Hilary and then came over to talk to the policeman who was standing beside me. He whispered something to him. The giant police officer turned to me and said, “Anna, you are going to have to come with me to the station.”

I thought, “Well, it was nice feeling the sunshine on my skin one last time,” on my way to a black undercover police car. Click here to continue reading my story.

Email ThisBlogThis!Share to TwitterShare to FacebookShare to Pinterest
Labels: Mennonite Stalker, My Story