The next day I did get the call to start working at the embroidery shop. Just like that, I was back on top of the world again. A week of sewing was plenty of time to start dreaming about that VCR again and how I would dress if I wasn’t so scared my mom would find out. I wondered how everyone was doing at the Job Finding Club.

I knew how Mark was doing since he had called me every day since I started my new job. I had mentioned to him that I didn’t have much furniture for my apartment. He told me he had a TV stand and a love seat that he was getting rid of and he offered to bring it over and help me carry it up the stairs to my apartment.

I was excited about the TV stand, I was imagining my VCR on it. But, then, my Low German brain wouldn’t let me enjoy that thought. I started getting nervous and thought, “A man is coming to my apartment and he is bringing a LOVE seat over Dios Mio!” I was terrified of being alone with a man.

I thought of all the things that could happen and why they call a sofa a love seat. I got really scared and decided to call Bree. I asked if she could come over and stay with me while Mark was bringing the furniture. She couldn’t because she had a date with a hot guy, she said. She told me since George lived in the same building only a few doors down from me, it would make more sense for me to call him and ask him to drop by while Mark dropped off the furniture.

While Bree gave me George´s phone number she noticed my hesitation about her idea, “Trust me, Anna, George would love to help, he is right there and he´s always home," Bree explained.

That didn’t ease my worries at all because I was still afraid of George as well. But, I didn’t have any other options because Mark was on his way.

I knew that George lived somewhere close to my building but I had no idea that he lived in the same building, on the same floor. I had never seen him around there. But, then again, I hardly looked around since I was used to people staring at me. Because of that, I never made eye contact with anyone. I was afraid of what people might say about the way I dressed, or I wouldn’t understand what they were saying. I just kept to myself.

My heart was pounding as I thought about it, but I didn’t have much time left. I opened all my windows in case either of them tried anything. I would scream and then, hopefully, a female would hear me and come to my rescue. I worked up the nerve to call George. He answered, “What?”

“Ahhh, I’m Anna. Remember me from the factory? I sat with you at lunch.”

“Oh, Anna! The Mexican who messed up our lunch orders yes! I remember.”

There went my face again, red like a tomato.

I explained what Bree told me but it took about twenty minutes.

“Really, Bree is going on a date with a hot guy and she told you to tell me that?” He asked.

“Okay! Sure, Anna, anything else?”

A few minutes later George knocked on the door. I was so nervous. I didn’t know what to do with myself. I opened the door and there he was leaning up against the doorway with his legs crossed and the biggest smile on his face.

“Hey, girly, holy f#ck, you are losing your shape! Ahhh, not that I was keeping an eye on your shape it’s just been a while since I have seen you… ahhh, shit, what am I saying? You are getting really skinny. Okay, I’ll shut the hell up now before I get myself in trouble,” He said.

I had noticed it too. My dresses were getting really loose. I invited him in. He walked around a bit and said, “Wow, you have nothing, not even a VCR or cable. Oh girl, what are you doing? You seriously need curtains.”

I couldn’t help but stare at his tattoos. He was wearing shorts and a tank top. His legs and arms were covered in tattoos. At work, he always wore jeans and a tee-shirt. I had only seen the tattoos he had on his arms from the elbow down. 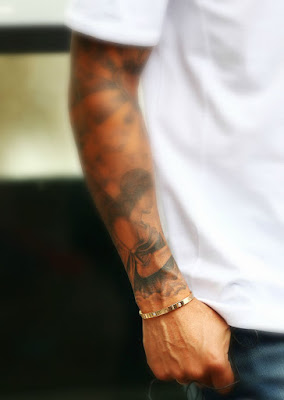 He noticed that I was staring at them and started telling me what the tattoos meant to him and they all had a story.

“I did most of the ones on my legs myself. That’s what I do in my spare time. I draw and do tattoos for people,” he said.

“If you want, you could come and watch me sometime.”

My Low German thoughts told me to never ever go to his place and watch him give someone a tattoo. But I thought that it would be interesting to watch how he does that. Then the buzzer rang. It was Mark with the furniture.

George and I went down the hallway. I walked slowly so he could go in front of me. That’s what I was used to in my colony where women always walked behind the men. He kept slowing down to walk beside me. I thought he must know this and maybe he enjoys making me nervous like Bree does.

It was a really hot day again, we were both sweating just from going down the steps. I just held doors as they carried the love seat up the stairs. They struggled a bit getting it through the door and set it down where I pointed to.

They were both dripping of sweat as they sat down on the living room floor. I went and got them some cold tap water from the fridge and a towel each to wipe their sweat off. Mark just smiled while he stared at me.

George said, “Thanks, girl,” turned to Mark and said, “Man, that couch is f#cking ugly as hell”

It was brown with big orange flowers on it.

“Yeah, I know, but it’s in good shape and it’s kind of Menno style, don’t you think? It was my mom’s and she took good care of it," Mark answered.
Mark got up and said, “Thanks for the help, man, I have to go. I will call you later, Anna.”

George rolled his eyes as Mark left and asked, “Where did you meet that f#cking loser?”

I turned all red again as I said, “Ahhh, at the Job Finding Club.”

“Really, he goes there?”

“I know someone who knows him and apparently he is a total loonie.”

I was thinking that loonies were coins, not people. I was confused. George got up and walked to the fridge and asked, “Do you mind if I get some more water from your fridge?”

“Yes, sure you can get more water.”

George opened the fridge door and asked, “Where is all your food?  There is no food in here.”

I opened the top freezer door to show him where I kept my food. I had a pack of hot dogs, a bag of frozen french fries, and a container of vanilla ice cream in there. He looked at me and asked, “Seriously, that is all the food you have?”

I opened my cupboard. In there I had four packs of chicken flavored Mr. Noodles, salt, pepper, and a jar of instant coffee.

"I love instant coffee because it’s the only thing I can get here in Canada that tastes the same as in Mexico."

I told him that I couldn’t really buy more food because I didn’t have any money and that it was okay. I drank coffee and water and that’s all I needed. I told him I couldn’t eat anyway. I hadn’t felt hungry ever since owning a SIN card and my experience in Hilary’s office.

He explained what nauseous meant and suggested I go see a doctor at a walk-in clinic. He explained where the nearest one was, it was only a few blocks down the street from the apartment building. He offered to go with me and show me where it was. I told him that I could find it and I would go in the morning. I couldn’t risk walking down the street with him and my mom finding out about it.

I knew that he was just trying to be helpful and it would have been so nice to walk with someone. Walking everywhere by myself was getting boring. But, I did so that people wouldn’t talk about me in Mexico more than they already did. If anyone saw me walking with a man, that would be one thing, but one with tattoos and long hair? That would have gotten some people very excited to gossip about.

According to Low German people, I was tipping over:  äwa-gebucked is a term used to describe someone who changes from the old colony way of life to the way of the worldly people. And, because of that, people had nothing good to say about me. I felt like I couldn’t be friends with any of them. But, I couldn’t be friends with English people either because I was trying to spare my mother the gossip and heartache it would cause her.

I couldn’t believe some of the untrue stories I heard from my mother that people were saying about me. It was hard for her and she already felt horrible for letting me go to Canada. She felt torn between what I told her and what other people told her.

No matter how I explained to her that I wasn’t doing anything bad, she felt that what I was doing was wrong and that she had to choose a side just like I did. Click here to continue reading my story.