The police officer guided me to an unmarked undercover police car, opened the passenger door and said, “Ma’am, please get in.” I was shaking so bad I had a hard time putting on my seatbelt.

The police officer didn’t say anything to me on the way to the police station. My heart skipped a beat when I heard a voice, “The bomb squad is now on sight at the factory,” over the CB radio. The police officer looked at me, then turned the radio off.

I had so many questions but I was too scared to ask the police officer what was happening. He wasn’t saying anything, he was just concentrating on driving. It looked like he was really mad at me.

I felt so tiny sitting beside him, I was afraid to say anything. I thought, “If I say anything wrong to him he could crush me with his thumb.” When I looked up at him he just gave me a fake half-smile and looked away.

That was the closest I had ever been to a policeman before. I thought of the time I got to go to Durango City with my aunt and uncle in their white van that they had brought from Canada.

As we drove out of the colonies my uncle had said, “Now you all have to put on your seatbelts because if we get pulled over by the Federales I will get a ticket.” He said everything in Low German except for the word ticket. I laughed and thought, “Ticket -- that’s a really funny word, I wonder what that means.”

My aunt had definitely eaten watermelons about eight months ago and forgotten to pick out the seeds. She was constantly reminding my uncle to slow down and to be careful but he didn’t listen to her. He tried to pass a gravel truck many times but there was just too much traffic, so he decided to drive like a complete maniac and pass the gravel truck on the right shoulder.

Sure enough, a Federale saw him do that and pulled us over. I understood enough of the conversation to know that the Federale asked my uncle why he was manejando como un pendejo (driving like an idiot.)

My uncle lied and told him that we were on our way to the hospital, pointed to his wife, threw some money at him, and just took off. The Federale didn’t even get a chance to respond to my uncle. He just sped off leaving the Federale in the Mexican dust.

When we arrived at the police station the officer got out of the car, walked around, and opened the car door for me. I followed him to the door of the police station. He opened it and gestured for me to go in, saying, “Ma’am, please follow me this way.”

We got to a room that looked a bit like an office. There were piles of papers everywhere. The police officer said, “Please have a seat.” I sat down. He took a deep breath, pulled up his gun belt as he sat down in a chair in front of me. He took off his cap, put his hands together, made eye contact with me, “Anna, do you know what is happening?” he asked.

“What is your boyfriend’s name, Anna?”

“Mark is not your boyfriend?”

“How long has this been going on?”

“I’m so sorry for all of this. I should have just called Mark back, that’s all he wanted. He just wanted me to call him back and I didn’t. This is my fault, why were there so many fire trucks and an ambulance at the factory, did someone get hurt?”

“No Anna, the reason I just brought you here was to get you away from the factory. We had to evacuate the whole building because a man named Mark called and ask to speak to you. Your supervisor told him that you could call him back at break time. He got really upset and started threatening your supervisor and hung up on Mark.”

“Mark called back right away, calming that he was your boyfriend and that he planted a bomb in the factory. He said that he was going to blow everything up.”

The police officer got a page to take a phone call. He got up and walked to a different room to pick up the phone. While I sat there alone with my thoughts, I had some time to process everything that was happening.

When I realized that I was completely clueless about everything and how much trouble I could actually be in, I suddenly felt nauseous. When the police officer came back he took one look at me and asked, “Are you okay, Anna? You look really pale.”

He opened the door quickly and said, “Here is a bathroom,” and pointed to it. He followed me and open the bathroom door for me. I just made it to the toilet and throw up. I felt really cold and started shivering.

When I came back I sat back down in the same chair, the police officer picked up his huge police jacket and gently wrapped it around me. He opened a bottle of water, gave it to me and said, “Here, have a drink,” with a real smile. After that, I started feeling more comfortable around him.

“I just spoke with my partner and they cleared the building, there was no bomb. Mark just wanted to get back at your supervisor for not letting him talk to you right away.

The police officer got a notepad and a pen out and said, “Okay Anna, can you go back to the first time you met Mark and tell me everything you know about him and what happened between you two?” 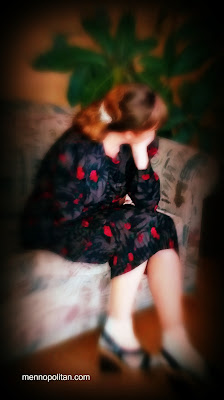 I started from the beginning -- the first time I met him at the job finding club. I told him everything including the times when he visited me at my apartment, the candy he had left me at work, the scary messages he had left on my answering machine, and that I had saved them all.

He wrote everything down as fast as I was talking. I thought that was amazing. “That was a smart thing to do, Anna, I am so glad you saved those messages, we will need them for evidence,” he said.

He asked me so many questions my head was spinning. He was using big words I had never heard of before. I was relieved when he finally asked, “Is there anything else you might have forgotten to tell me?”

“Okay, I think we are done here. Until my partners find this guy and arrest him you are not safe out there. Is there someone you would like to call? You want to call your parents to come and pick you up? You shouldn’t be alone tonight, or at least until we find Mark and arrest him.”

“He is going to get arrested?” I asked.

“Yes Anna, he is. He committed a serious crime. He is in big trouble he is definitely going to jail.”

I thought, “Oh no, what is he going to do when he finds out that he is going to jail because of me?” I ran to the bathroom and threw up again. I rinsed my mouth with water, washed my face, and walked back into the room, and sat back down.

“Who would you like to call to come and pick you up? Do you have any family you could call or your parents?”

“I can’t call my parents, if they left right away they would get here in three days. They live in Mexico. I do have a bunch of aunts and uncles close by. But if I called them they would laugh at me and wish that you would put me in jail just for being stupid.”

“Why do they think that you are being stupid?”

“They just don’t understand the choices I have made and they don’t agree with the lifestyle I am living. They believe that we Dietsche menschen, (Mennonite people) ahhh... How much time do you have?”

He laughed and said, “Okay, I understand. Maybe you could tell me all about that another time. But none of them would help you because of that?”

“Yes. Well, most of them. I do have one aunt and uncle that I still visit with occasionally, they are the only ones who still like me. Their kids are allowed to dress like worldly people and go to high school. Most of my aunts and uncles don’t speak to them either because of that. But they live too far away.”

“Okay, I understand. Do you have a friend you could call and perhaps stay with until we make the arrest?”

“The only friend I have right now who would help me is George, my neighbour. Could you call him and explain everything to him? It would go a lot faster if you did it. I just really hope that he is home tonight.”

“Sure, give me his phone number and I will give him a call from the other room."

He wouldn’t make one phone call in front of me. I got the idea that he might be keeping secrets from me and that he didn’t want me to know exactly what was going on, or what he was telling everyone except me. Click here to continue reading my story.

Email ThisBlogThis!Share to TwitterShare to FacebookShare to Pinterest
Labels: Clueless Mennonite, My Story