When George opened the door and saw my face, he embraced me with a companionate hug. I hadn’t experienced affection quite like that before. A question crossed my mind: how was it possible for life to be so beautiful and so depressing at the same time? Better yet, how could those tattoo-covered arms I was so afraid of once have such a comforting effect on me?

“How are you holding up, sweetie?”

“I was fine until I remembered that Mark is going to blame me for getting caught by the police and then I couldn't breathe.”

“Anna, please do me a favor and don’t let those thoughts consume you. I doesn't matter what Mark thinks. It is not your fault. It’s over now. He isn’t going to bother you again. Just try to remember that the next time you get all worried about it again, okay?”

“So do you remember the motorcycle ride drill? Hold on to me -- I mean really hold on tight. Don’t let go and don’t fall off. The last thing I need is to explain to your family that you fell off my motorcycle.”

I just stood there and stared at him as he handed me a helmet, and grabbed his jacket, helmet and keys. He turned to me, smiled, winked, and said, “Ready for the ride of your life?”

I forgot all about being nervous when he manhandled my face as he helped me put the helmet on. After he hopped on the motorcycle, I cozied up to him and happily put my arms around his waist without thinking twice about it. Any fear and nervousness I felt got left behind as he took off.

Upon arriving at his mom’s house in Port Stanley, George helped me get off the motorcycle, took my helmet off, and guided me into the house. A beautiful, petite woman with long blond hair walked toward us, I thought, “that must be his friend or sister.” George gave her a hug and said, “Anna, this is my mom, Julie.”

“Me too and it´s really nice to meet you too, ” I replied.

I couldn’t help but stare at her. She had perfect teeth, just like George. She looked way too young to be the mother of a grown man. I just couldn’t wrap my head around that. Most women in my colony started looking old shortly after getting married, especially by the time they had grown kids like George -- by that time they looked really old.

She invited us into the kitchen to sit at the table and offered us drinks. I had never heard of half of the drinks she listed for us to choose from. George chose a beer and Julie poured herself a glass of wine. I decided that I would try the wine that Julie was drinking.

I had only ever taken sips of the drinks brought to our village by the boys who would go to town to buy it. They usually brought beer, tequila, brandy, Fresca, and Coke, to mix.

I took a sip of the wine and instantly felt the effects. I began to feel more comfortable sitting at the table. Julie asked me to tell her about growing up in a Mennonite colony in Mexico. I started talking and the words were flowing out of my mouth perfectly, words that I had never said before. It was like the wine had unlocked my English-word storage compartment and they were just flowing out naturally.

As I was telling Julie about growing up in Mexico, every once in a while I would look at George. He was just sitting there, leaning back in the chair, stretched out with his legs crossed, sipping away at his beer and smiling.

I felt strange yet comfortable being there. I felt that I could talk about what it was really like growing up as a Mennonite in Mexico. I often felt that most people who seemed interested were only interested so they could mock our lifestyle. But it didn't feel like that with Julie, she was genuinely interested.

While Julie checked on the food. George jumped up from the chair and asked, “Would you like to go for a short stroll on the beach before supper?”

“MOM, we’re going for a walk to the beach, okay?” George shouted.

“Okay, just don’t take too long -- the food is almost ready,” she replied.

The beach was right behind her house and the sun was about to set as we began to walk alongside the water. The water sparkled from the reflection of the sun setting. There was no one else at the beach.

“Yes, she is an amazing woman, I admire her strength. Things haven’t always been good between us. I haven’t exactly made her life easy, that’s for sure.”

“Well, she didn’t like it when I started with my tattoos and her idea of a happy life is different than mine. But she has accepted me as I am, even though it wasn’t easy for her. In spite of our differences, we have a great relationship. We spend quite a bit of time together now. People often mistake her for my girlfriend, it’s hilarious.”

“I can see why. If I would have seen you with her before I met her, I would have thought that she might be Harley -- You know the woman I thought you were storing at your buddy’s house.”

“What, you thought Harley was a woman?”

“I know!” I answered as we both burst with laughter.

We throw rocks, George tried to teach me how to make the rocks skip on the water, but he was unsuccessful. We chased seagulls while we ran back to his mom’s house. When we walked in, the table was set and the food was ready. It smelled amazing.

Between the three of us, we finished a whole roasted chicken with a side of mashed potatoes, corn, and salad. George ate most of it. Julie began telling me how she admired my bravery. I told her that it hadn’t been easy and that George had helped me every time I got myself in trouble.

I looked at George as I said that. He smiled and winked at me.

“He really is an amazing man. I just wish he didn’t have so many tattoos,” she said.

“Well it’s true, George. Most people have a hard time getting past the tattoos. Way too often people don’t even get to know how amazing you are because of them.”

I really wanted to tell her that I felt the same way, standing out as a Mexican Mennonite. Most people had a preconceived idea about us before getting to know us as individuals. I related to George in that sense. It is assumed that when someone belongs to a group that there is no room for individuality within the group. I was guilty of it as much as anybody. I assumed because George had tattoos he was a bad person.

I got too nervous and decided that I was no one to have an opinion about that. I feared that she would think less of me for comparing tattoos culture to Mennonite culture. I didn't know how to explain that I was comparing groups in general. Instead, I told her about the time a guy riding his bicycle smashed into a post because he was staring at me so much and he got hurt really badly because of it.

She laughed and said, “No way! Too bad he got hurt, but that’s really funny.”

We laughed for a while. “Do you have any family here in Canada?” she asked.

“Yes, some of my aunts, uncles and cousins live here. But most of them don’t speak to me anymore because they don't agree with my lifestyle. There is a lot of gossip going around about me and they believe that it's all true. I gave up on trying to explain myself.”

“Oh honey, I’m sure that can’t be easy. You are a strong and brave woman to do what you are doing, good for you to go after what you want,” she said.

While Julie went to the kitchen to serve the dessert, George and I gathered the dishes. She served warm apple pie with cherry ice cream.

“Do you always have dessert after a meal in your culture?” Julie wondered. 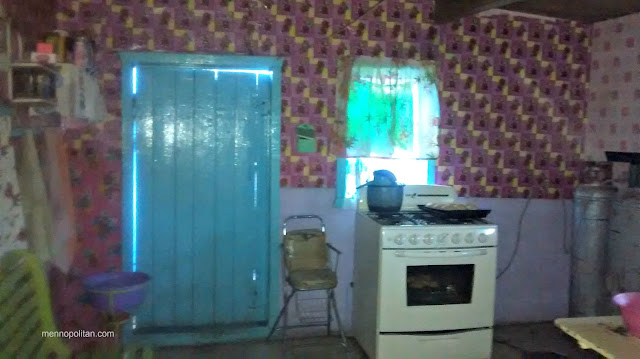 “No, we don’t. We have faspa instead. Usually, between three and four o’clock we all gather around the table and enjoy a coffee, or tea, with sugar cubes, tweeback (buns), and all sorts of cold cuts, spreads and an assortment of sweets,” I explained.

“What a great idea,” she thought.

“In the colony, we hardly ever had ice cream. Only the richest people had fridges. As far as I can remember I had ice cream about four times before I came to Canada. Once when I was visiting the Guenther’s in my village, twice when I got to go to Nuevo Ideal on a bus, and once when I got to go to Durango City with my aunt and uncle who owned one of those big white a vans to go back and forth from Mexico to Canada. Now that I have my very own fridge I make a lot of ice cubes, I love it.”

“Thank you for allowing me to come with George to visit you and for the amazing meal,” I said.

“Oh honey, you’re so welcome. And feel free to pop in whenever you like. You don’t even have to call me first, just come over any time. Anytime you want to go to the beach feel free to park your care here.”

“I just might do that. Thank you so much!”

“It’s so nice to meet you, Anna. I have really enjoyed your company,” she replied.

“It was really nice to meet you too Julie.” Click here to continue reading my story.

Email ThisBlogThis!Share to TwitterShare to FacebookShare to Pinterest
Labels: Low German speaking Mennonites from Mexico, My Story, The Ugly and the Strange Mennonite