Continued from Once upon a time in Posen Land

I hadn’t slept much. I couldn’t stop thinking about the dream I’d had and what I was supposed to do with that. I got ready and went to school thinking about Posen Land and missing my grandfather. When I got to school I asked my teacher if she knew if there was a place called Posen Land.

She said, “I’m not sure, but I’ll tell you what, Anna. Next week we can go on the computers and you can type Posen Land into the World Wide Web. It will tell you if it is real or not, and if it is, you can learn anything about it you want.”

I was so excited and thought, “Whatever that World Wide Web thing is, it must be amazing.”

I had lunch with Chung and Steve. Steve’s face was almost healed and he actually made eye contact with me once during lunch.

I was still nervous around him -- I wanted him to like me, I was so envious of his friendships. Every person he walked by acknowledged him with a smile or a high-five, and words that started with, “Hey, DUDE!” I managed to forget about my worries for a while and laugh with Chung at his jokes. My teacher told me how proud she was of all the work I had handed in again.

I drove to work, thinking how great my day at school had been and hoping that work would be the same. When I pulled up to the parking lot at the factory George was sitting at the picnic table by himself.

When he saw me he got up and walked to the car, opened the door for me and waited for me to get out. Before I could shut the door he put his arms around me and hugged me really tight, pulling me up off the ground. First I turned all red then I felt butterflies in my stomach, then I started shaking again.

He swung me away from the door, closed it, and slowly loosened his grip. l slid against him back to the ground. He put his arm around my shoulder, guided me toward the picnic table, and said, “Please sit down, I want to talk to you.”

Once I was settled, he continued: “Are you okay? how are you feeling? Hilary told me what happened last night and I got all worried. You know that you can come over or call me anytime you want to, even if it is at the end of your shift. I wouldn’t mind at all, okay?”

“Okay. I am fine, I just fainted because I hadn’t eaten, that’s all. I feel great. I’m feeling ready to work. Thanks for always looking out for me.”

“Don’t mention it, I want to help in any way that I can. It’s okay to take a day off if you need to, you know,” he said.

“Yes, I know, Hilary told me that I could. But I think I’m better off here than at home worrying and over-thinking everything.”

He tilted his head, raised his eyebrows, and said, “Okay.”

We got up and walked inside. He punched out and I punched in before the big crowd came out. He said, “Take care of yourself, don’t forget to eat, and have a good night,” and he winked at me again.

I had a hard time concentrating while working at my usual sewing station. I was still feeling the shivers from George’s hug. It happened so fast, I needed time to process it.

There were two other Low German women working in my area. They occasionally looked at me, giggled about something, and quickly looked away when I looked at them.

I brought my homework with me and worked on it at the first break while I ate a carrot stick and three crackers. Bree came over and invited me to play a game of poker at lunch break. I told her, “No thanks, I have to finish my homework, but maybe next time.”

I couldn’t tell her the real reason why I couldn’t play cards. Low German people were not allowed to play card games like that. We were told that if we did we would have nightmares about the devil. I visualized her rolling her eyes at me like never before if I told her that.

I thought back to the time my sister and I were visiting the Hides (our neighbours), and they were playing a game of cards. They asked if we wanted to play. We told them the reasons why we couldn’t play and they all looked at each other like we were crazy, but we thought they were the crazy ones.

About a month after that my older sister’s youth group decided to play a game of cards anyway. Two of the Hide brothers that were part of the group decided to have a little fun and scare them.

They left earlier than the rest of the youth, went home, and covered themselves with a white bed sheet with holes cut into where their eyes were. They waited for everyone behind the bush and followed them home behind them and scared the crap out of all of them. My sister never touched a card again after that, even after finding out the truth.

Even though I knew that this was kind of like the watermelon seed story, part of me was afraid of what might happen and I had enough to deal with as it was. I didn’t want to risk having devilish dreams on top of everything else.

At lunchtime, I decided to stay at my workstation and work away at my school work. I was deep in thought, concentrating really hard. A deep voice from behind said, “Anna! How are you feeling?” I turned around and saw Hilary leaning against my work desk with a clipboard in his hands. He always looked and smelled amazing.

I was stunned, I couldn’t even speak for a moment. I just smiled at him as he was talking to me. Finally, I told him that I was feeling great and that I had eaten at break time.

I just continued smiling at him as he continued to talk. He asked me who I would want my vacation pay and my cheque to go to if something would ever happen to me. He saw that I was a bit freaked out by that question and explained that everyone who worked there had to put that information on the forms.

I told him that I wanted it to go to my mom and he wrote that down. I realized that everyone had to do that paperwork on their own, but he knew I couldn’t write all that by myself and was kind enough to do it for me.

Hilary went back to work in his office and I started sewing again. I tried really hard to just remember his voice saying “Wonderful, wonderful, Anna. Wonderful!” But instead, Hilary’s voice left me thinking, “Dios mio! what is going to happen to me?” I quickly reminded myself, “No, Anna, don’t let your thoughts go there.”

I drove home feeling like something bad was going to happen to me. But I thought it was just because of the conversation I had had with Hilary that got me thinking about that. I steered my thoughts in a different direction and decided to think about how much better my day had been, then the day before.

When I got home I was so tempted to go knock on George’s door. My heart was pounding and butterflies were going wild in my stomach as I talked myself out of doing that. Instead, I went to bed and imagined what it would be like if George was my real boyfriend.

I imagined us as a couple. I turned all red just thinking about it. I wondered if he would care for me the same way he had been and how amazing it would be. I imagined George kissing me in a way that would be very different from my Jake Dyck kiss experience. 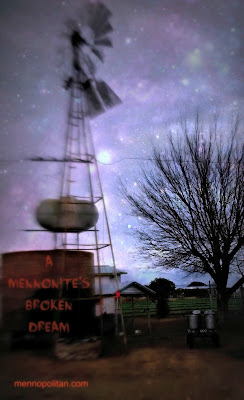 I was hoping I could visualize the kiss enough so it would turn into a real dream. Instead, I dreamt that George and I were at my family gathering in Mexico at Christmas. Mom, my sisters, and I were inside making komstborscht and looking after my younger brothers, my nieces and nephews.

George was sitting outside under a tree with my dad and my sister’s husband who was wearing overalls, and knoking soot (eating sunflower seeds). They were talking about how they had no choice but to go to Canada and pick cucumbers in the summers so that they would be able to feed their families.

They talked about the reasons why they couldn’t stay in Canada all year round. That it was because they don’t want their kids to learn what the Canadian public schools were teaching them.

George came inside, walked up behind me as I was stirring the komstborscht. He put his arms around my waist, rested his chin on my shoulder, and said, “Anna, but don’t they know that getting an education is the only way they can get out of this hopelessness? You guys live in this beautiful country and this is what you spend your time doing?”

“Ahhh…” Before I could answer that, he remembered that I had tried to explain it to him so many times before, but he still just didn’t get it. My Menno-verse frustrated the heck out of him.

“Let’s get on my motorcycle and get the f#ck out of here. Forget the cabbage soup, have you ever been to Mexico City? You wanna go and eat there instead?” Click here to continue reading my story.

Email ThisBlogThis!Share to TwitterShare to FacebookShare to Pinterest
Labels: A Mennonite's Broken Dream, My Story