I explained to her that I didn’t feel welcome at church, then she began with one of her “just because” speeches like she always gave us growing up.

She said, “Just because you don’t feel like doing something is not a good enough reason not to do it.”

Then I remembered the ones I heard the most growing up: “Just because you are poor doesn’t give you the right to be a slob, you always have water and a cloth to clean with.” “Just because you don’t have all the ingredients to make the meal that you would prefer, doesn’t mean you can’t create a tasty meal out of what you have on hand,” and so on.

She said, “If you dress appropriately they will welcome you. Maybe you just need to adjust your attitude. You just have to give it a chance. You are still part of this, I want you to come with me and just walk in there like nothing has changed,” she said.

“No problem, we can get up early and go to the house where your aunt and uncle are staying and go with them. You will have to drop me off there tomorrow anyway because we are leaving from their house to go back home to Mexico first thing Monday morning.”

There was no talking myself out of it, she had it all planned out. No matter what my excuse was, she wasn’t taking no for an answer.

She looked at me and said, “Anna you are coming to church with me and that is it.”

I went and dug out my duak (head covering) and black nylons, and Sunday morning I went to church with my mom.

While walking into the church I tried to just walk in like nothing had changed, but it didn’t work when all those eyes stared at me. I could tell which ones were from the Durango colony -- they were staring the most because they had all heard a story about me and the women were all wearing a mats.

I thought “Okay, I will put my mom’s advice to the test and adjust my attitude about this.” 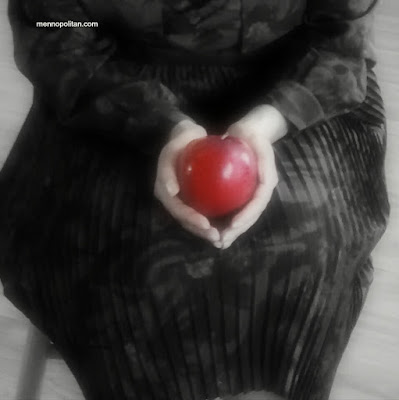 That was always why my thoughts had a hard time staying where I was, and my mind would wander off to other places. I thought, “Okay, I think all these people are dead-set against what I am doing, but chances are that some of them are pretending, just like I am.”

I realized that most of them just didn’t understand that I needed to do that -- that my life depended on it, and that I wasn’t going to stop because of them. I thought, “They may not all accept that, but if I do, that is what matters. And maybe I feel like this because I have just forgotten that a church is a place where people are so serious.”

My mind wandered to the time when I was standing in the lineup at the bank and every single person was staring at me because of what I thought was the way I was dressed. What I learned there was that when I smiled at a person who stared at me they would either smile back or stop staring.

While they were still singing the same song, I thought, “Maybe I should try that here, too.” My heart started pounding as I talked myself into it and was thinking, “Anna! Back to pretending that I am singing along,” followed by, “Wow, I can accomplish so many things in my head during one song. Sing, Anna! Sing!”

When the song had finally come to an end, the minister began speaking in High German, and off my mind went again, working on all the other stuff I was trying to accomplish. “Okay, the next person who stares at me, I will smile at them,” I thought. Then the minister started speaking Low German.

I had to fight the tears as my thoughts stopped wandering. He had my full attention as I began to listen to him. As he spoke and I actually understood every single word he said. I felt like he was speaking directly to me and said things that I needed to hear. He spoke about treating people with kindness, respecting others all others, and treating our neighbours that way we would like to be treated.

I thought “Yes! Especially my neighbour!” And by the time we all knelt to pray the first time, I left a few tears on the bench when I knew it was safe and no one was watching me.

After the third time, we knelt to pray and the closing song started, I had left my hostile thoughts with my tears on the bench. I told myself to try my best to leave them there for good, though I knew that that wasn’t going to be easy for me.

On my way out I happened to pass the minister and made eye contact, which I always feared in the Mexican Old Colony church. He didn’t smile but he nodded his head, which translates to, “Anna, you are welcome here with us.” I turned all red and looked away quickly. He might have even said hello if I would have given him the chance.

While I was waiting to reconnect with my mom I stood there and smiled. Most people that passed me smiled back at me. I thought, “Well there you have it, Anna! Mom was right again: they may not agree with my lifestyle but they don’t all hate me.”

While following my aunt and uncle to the house where they were staying at I felt relieved, guilty, and sad at the same time as I admitted to my mom that she was right.

Just like I asked her the day she arrived at my apartment, she said, “Said ekj dei dot nich? (Didn’t I tell you?)”

“Yes, you did, but it’s just hard to believe you when you are so far away,” I said and we both laughed.

We had komst bourched and head cheese for lunch at the house where my aunt and uncle were staying. After we did the dishes, we went outside and sat under a tree. We ate sunflower seeds and talked about all the family gatherings that were going to happen in Mexico at Christmas time.

My aunt asked, “What about you, Anna? Are you going to Mexico for Christmas?”

“No, I won’t be able to. I want to stay and continue school so I can finish before I turn thirty,” I answered.

My aunt laughed and said, “Really? Is it that important to you? I would forget that idea and just go to Mexico.”

I sat there and felt like I had lived that exact experience before. Then it came to me -- it was the dream I had where George was sitting under that tree but we were in Mexico. In the dream, he had said, “You live in this awesome country and this is what you spend your time doing? Anna let’s hop on my motorcycle and get the f#ck out of here.”

Remembering George made me miss him, my apartment, and my routine. I was looking forward to going back to all of that -- especially after my mom’s visit I was feeling a bit more at ease with where things were between us.

When we went back into the house to start preparing faspa, my aunt invited me to the living room where she had all her luggage ready to go to Mexico. She pulled out a suitcase full of fabric for dresses that she had bought to take to Mexico. She pulled out a bag and gave it to me and said, “This one is for you. You should make it in case you change your mind about coming to Mexico for Christmas.”

I took it and said, “Thank you,” as I thought, “Great, my pile is growing.” I immediately felt terrible for thinking that, knowing that that was the only way she knew how to show me that she cared about me. Unlike the aunt who just thinks I need a spanking every time she thinks about me.

The only way I could show her I truly appreciated it was by making it and wearing it some time, and I decided that I would do just that.

As we ate faspa together I had a hard time staying awake. I was so tired and felt like I had had the longest weekend ever. I felt bad but I decided that I wanted to go home before supper to get a bit of rest before Monday came along.

I knew I had to say goodbye to my mom anyway, and the sooner I did it the sooner I could start getting over the torn, guilty, and exhausted feeling I had about it. I felt selfish for wanting to rest and get back to my routine, knowing that my mom had no choice but to continue to go along with whatever my uncle decided to do.

I really wanted to hug my mom and my aunt when I said bye to them, but I knew it would be really strange for them. I thought I would leave that for another time and wondered if that time would ever come.

On my way home I felt like all the rocks I had dropped on the church parking lot at Richard’s funeral had climbed their way back onto my shoulders. I realized that while I was feeling uncertain about most things, the one thing I could be absolutely certain about was the constant stream of unexpected hellos and goodbyes that were going to be a regular part of my life no matter what happened to me.

Something told me that the way everything went down that weekend was just the beginning.

When I got home, I was so exhausted I went straight to sleep. There I was again on the boat, drifting off to Posen Land, seeking answers.  I thought that I had moved on and put that away, as I had my feelings about Mondays being happy beginnings. All that progress had vanished after the weekend I had experienced.

Monday morning when I woke up and saw that my mom had left a box of stuff behind, I immediately thought, “Oh great, now I am going to have to drive it all the way back to where she is staying.”

I opened it to see if there was anything important in it, like a citizenship card or a passport that she would need to cross the border. But it wasn’t, and that was when I realized she had left it there on purpose. When I began to look through it I realized that I shouldn’t have done that. Click here to continue reading my story.

Email ThisBlogThis!Share to TwitterShare to FacebookShare to Pinterest
Labels: Hello! Mennonite, My Story