There’s something about that Mennonite


Continued from Mennonite Business as Usual

Christina was working at the station beside mine. I had worked with her and her boyfriend Rick many times while I worked the dayshift. She had always been really nice to me. I was thrilled to be able to get to work with her again.

Christina was stunningly beautiful and pleasant to be around. Everyone loved her. She had a unique style, and always dressed and smelled like she should be going out to have a good time, not work in a factory with me.

While we worked she told me all about the new house that she had just bought with her boyfriend. They had moved in together and she gushed about how excited she was to get married. 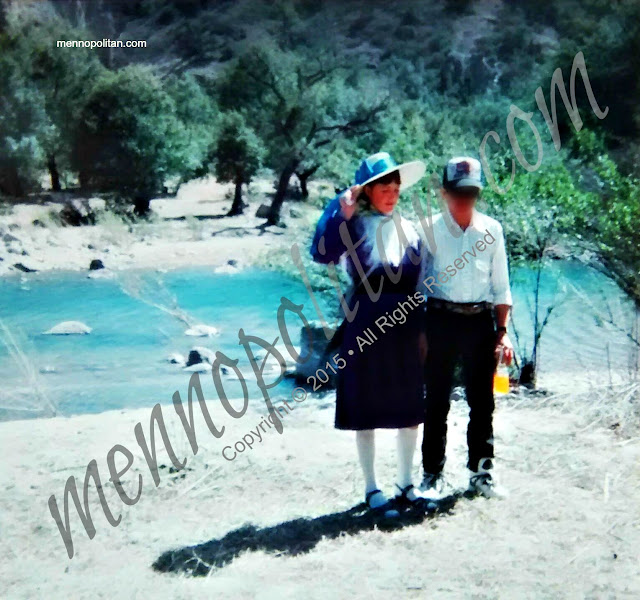 In my colony, there were people who married someone they didn’t even really like and suffered through a lifetime of unhappiness, just because the alternative would have been worse.

For us Dietsche women, marriage was about needing a man to take care of us because we couldn’t do that ourselves. Not getting married meant that we would have to live with our parents for the rest of our lives because there would be nothing else for us.

I thought Christina had so many things going for her. She was so smart and she had gone to college. I thought she should have no problem taking care of herself. She didn’t really need a man to take care of her.

During the time I was growing up if a woman hadn’t gotten married by the time she was twenty-one, she had become the person who would just stay home, take care of her aging parents, and became the babysitter for her nieces and nephews. She would get to do all the work to prepare and clean up after the family gatherings. These gatherings were often for more than a hundred people. She would get taken advantage of, pushed aside, and sometimes treated badly. She wouldn’t fit with any crowd, she couldn’t be with the married people nor the youth. A lot of women were afraid of that happening to them and they really didn’t want to end up like that. And that would be a reason to jump at the first chance they had to get married. I always thought that that was why some girls got married so young. Sometimes girls would get married as young as sixteen.

I was afraid that everything I admired about Christina would vanish after she got married. I really wanted to tell her that, but then I thought maybe it would be different for her. She would have to figure that out for herself, just like I was learning to figure things out for myself.

During work one day Christina came up with the idea to go pick up cappuccinos from Tim Hortons during the lunch hour. She said if I drove she would pay for mine. I asked, “What is a cappuccino?”

“What? You haven’t had a cappuccino? Wow, you have been missing out! I am seriously addicted to them.”

Bree walked past us on her way to the bathroom and overheard us talking about Tim Hortons. She got all excited and asked if we could let her know if we were going. She would give us money to buy her a coffee, she also offered to pay for mine if I was willing to do that for her.

A few minutes later the supervisor came walking toward us and I thought, “Oh crap! What does he want? Please don’t mention anything about Friday, bombs, or how many boyfriends he thinks I have, in front of Christina.”

“I heard you’re doing a Tim Hortons run at lunch.”

“I am thinking about it.”

Bree had told people who worked in the back, and before I knew what happened, I was picking up coffees for everybody.

“I’ll tell you what Anna, I will walk around, take all the orders, collect the money, and call in the order. I will count out the exact change so you just have to go in, give them the money, grab the order, and bring it back here. I will pay for whatever you order. Christina can go with you to help. You guys can go twenty minutes before lunch, what do you say?”

I said, “Ahhh…” while I looked at Christina. She nodded her head that it was a good idea. I didn’t like or trust him at all. I was afraid that he was going to prank me or I would mess up the order and he would laugh at me again, he made me really nervous.

I decided that because Christina was coming with me to help, I would go. I said, okay to the supervisor.

“Great, thanks Anna,” he said as he walked away.

I looked at Christina and asked, “What’s his name anyway? I can never remember.”

Christina and I drove to Tim Hortons and picked up a huge order. It was easy -- we made it back just before the lunch bell rang. I decided that I would try this coffee called “cappuccino” that Christina was so addicted to.

Everyone from the entire afternoon shift, including Derek, came into the lunchroom and thanked me for doing that. I suddenly felt like they were all my friends. I thought, “That was all I had to do? They must really like Tim Hortons.”

Bree, Derek, Christina, and a few guys who worked in the back came and sat down at the table where I had mostly been sitting by myself since working the afternoon shift. While the guys were talking and laughing they called each other “hey dude” a lot.

One of those guys asked me if I wanted to play cards with them. I thought, “He can never find out the real reason why I can’t play cards.” I said, “No thanks, you guys go ahead, today I’d prefer to just sit here and try to enjoy my very first French Vanilla cappuccino.”

“Are you for real, you have never had a cappuccino before?”

“You are Mexican Mennonite, right?”

“Ahhh… I was born in Mexico. But you could just call me Anna,” I answered.

“Oh… sure thing, Anna. You could come and party with us some time. If you ever want to experience the time of your life, just let me know.”

“Ahhh… I’ll think about it,” I replied nervously while I thought, “I will be thinking about this for a very long time, uh, ‘dude.’”

It was really strange -- suddenly everybody was treating me so differently. They all seemed so interested and were willing to talk to me. Three people offered to pay for my order. I wondered if it was just that I had done them all a favor and picked up Tim Hortons or if there was something more going on.

I thought maybe it was because everyone saw that Christina and I were friends and suddenly I became interesting because of her. Christina and Rick were always surrounded by people. It seemed like every single person who worked there were friends with both of them.

Everybody went crazy over Rick’s car. I remember a few guys saying “sweet ride, dude,” to him. His car had a special antenna for a giant phone that he had in it. He could call people right from his car. I thought that was amazing.

When looking at Rick’s “sweet ride,” I looked at the big picture. It wasn’t a buggy, it had a stereo and four rubber tires. That meant more to me than anyone would ever understand. Even if I attempted to explain that to any of them, I didn’t think that they would get it.

It seemed in one night I had gone from “one of those Mexican Mennonites” to joining the “It crowd” and the “cool dudes” were talking to me. I felt really strange. I had just learned enough English to get by, I didn’t really understand the language of the “dudes.”

While I sat there watching how people interacted with each other, I realized how different their behavior was from what I was used to. I thought that the cappuccino everyone went so nuts over wasn’t even that good. It was way too sweet in my opinion, but I would never say that out loud.

While pretending the cappuccino was as delicious as everyone told me it was, I wondered if they all knew about what had happened there on Friday and they were all under strict orders to be extra nice to me. I wondered if George and/or Hilary had anything to do with that.

Derek the supervisor suddenly came to check on us more than he usually did. Every time he checked up on us he asked, “How are you doing, Anna?” I wondered if Hilary told him to keep a close eye on me.

I reminded myself that I wasn’t going to overthink everything anymore like I had been doing. As strange as it was, I tried to just enjoy the sudden interest everyone had in me. After all, I had always wanted to be part of it all and socialize with as many people as I could. I figured that I would learn about the world a lot faster that way.

Finally, I just told myself. “Okay, whatever is going on here, it doesn’t really matter. What matters is that I am still working here and everybody is being nice to me. Just leave it alone, Anna!”

Over that week I finished three more school workbooks. I spent a lot of time with Christina. I visited her house. Their home was beautiful. I had never been inside such a fancy house before. It was neat and tidy -- everything was in its place -- and she had fashion magazines which I loved to look at.

Christina’s boyfriend Rick was still working the dayshift. He often visited her during the lunch hour. He always included me in everything. He often brought us cappuccinos and they even took me along to a fancy restaurant once. Just because that was the kind of people they were.

I began to see why everybody liked them so much. I felt special that such fancy people would spend time with me. But the more time I spent with them, I couldn’t stop a feeling I had that there was something about Rick. Something that I couldn’t put words to, I felt that there was a familiar sadness to him.

I thought maybe I felt that way because I had never experienced a friendship like that before. But it all made sense when Christina called me, crying hysterically, one night right after I had dropped her off at her house at the end of our shift. Click here to continue reading my story.

Email ThisBlogThis!Share to TwitterShare to FacebookShare to Pinterest
Labels: My Story, There’s something about that Mennonite