Continued from A Haunted Mennonite

As the door closed behind me, I stood there for a moment to catch my breath before I walked into the waiting room. I was so nervous and feeling extremely awkward as I sat down beside Mrs. Braun. I asked her in Low German if I could hold her baby.

She looked at me with those sad, depressed, and teary eyes. I could tell she wasn’t breathing deeply enough, just like I always did when I was in that state. It seemed as though she hadn’t heard what I said.

“I would love to hold your baby, is it okay if I hold your baby? Do you know who I am? I think you know my mom.” She nodded her head as the tears rolled down her cheeks onto her baby’s blanket. I explained to her what darop (village) I was from. She already knew but I didn’t know what else to say to her.

“Can I show you something?” I asked.

She just stared at me in a daze so I just started to breathe. I told her how I was breathing had helped me during tough times, I asked her if she could try it. She handed me the baby and I put it up against my chest just like I used to do with my little brothers. 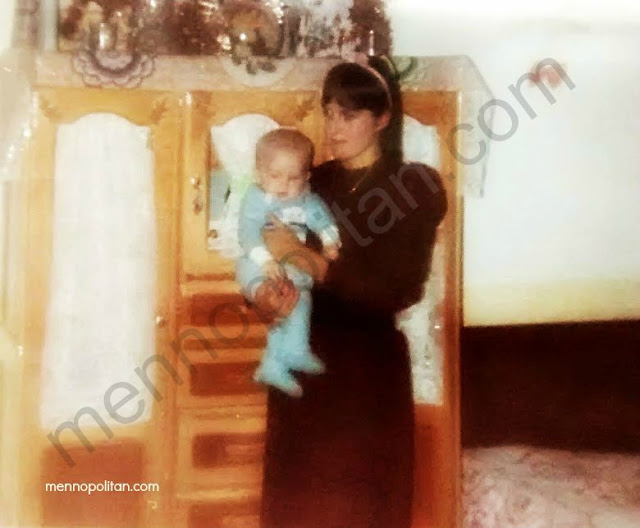 I told her that I would like to help her. I would stay with all the kids so she could talk to the nurse without any interruptions. The nurse walked in and overheard me offering to help. She said, “That is a great idea, Anna. Would you do that?” She turned to Mrs. Braun and said, “Then I can take my time to go over everything with you.”

Finally, Mrs. Braun began to acknowledge what we were saying to her. She said, “Okay,” got up, and followed the nurse, looking lost and confused.

While holding the baby I started talking to the rest of her kids in Low German until they stopped fighting and throwing toys around. The receptionist thanked me and asked if it would be alright to give them a lollipop.

I said, “Yes, but only after they put all the toys back.”

The baby fell asleep in my arms so I put him in the car seat. I told the kids if they would put all the toys back and say sorry to the receptionist for throwing them, she would give them a lollipop. They just stared me for a while, then finally the oldest one started and the rest of them helped until the toys were all put away.

They walked up to the receptionist in a line with their heads down and all said sorry at the same time. She said, “Okay, thank you for cleaning up the toys,” and handed them each a lollipop while I sat down on the floor. They all came and sat down beside me, one by one, and asked if I could help them take the wrapper off. I opened one lollipop after another until they were all opened.

I picked up a book that said Green Eggs and Ham on the cover. I asked the oldest boy if he had ever eaten green eggs in Mexico and he said, “Oba nee, dan sant de sea schita” (Oh no, then they are very gross). We all laughed and agreed with him. He asked if the people in the book ate the green eggs.

The oldest boy said, “We can’t read. Can you read it for us?”

“We really want to know, read it to us,” they all said.

There I was, backed into a corner by a bunch of kids who were growing up just like I had. They were curious about books but they couldn’t read. My heart started pounding as I began to consider reading out loud to them.

I felt like I was backed into a corner by a monster named Awkward that was about to bite me. Just the thought of it sent shivering awkwardness up my spine. I took a few deep breaths as I scanned the room for anyone that might judge me. Luckily there was no one else in the waiting room.

I inhaled a big deep breath as I braced myself for that monstrous fright and went for it. I said the first sentence out loud in a shaken cracked voice, paused, and took another deep breath. I didn’t make eye contact with the kids but there was no sound of them. They were sitting completely still and waiting for more.

I took another deep breath and said the second sentence, paused a bit and moved to the next one. I skipped the words I couldn’t pronounce and just kept going. With each turning page, my heartbeat slowed down a bit.

I began reading a bit faster each time I started a new sentence. I came to the end of the book. I looked up and they were all staring at me in a daze. One of the younger boys handed me another book and said, “More! Can you read this one?”

I took the book and began reading again. When I finished that book and asked, “Aren’t you going to school?” I already knew that the answer to that question was no.

One of the smaller girls said, “Mom doesn’t like Canada, she is crying all the time.” Her older sister elbowed her and said, “Grita, dü muts nijch emma aules sajen” (Margaret, you shouldn’t always tell everything).

“It’s okay Grita, I won’t tell anyone,” I said as the door opened. Mrs. Braun and the nurse walked into the waiting room. The kids were so disappointed they didn’t want to leave. They wanted me to read more stories to them. That was such an amazing feeling and wanted to experience it again.

I helped them all put on their shoes and Mrs. Braun looked at me with such gratefulness and said, “Dankschien fea me so sea üthalpen” (Thank you for helping me out so much).

She asked what she owed me for doing that, which is common among Dietche people. By asking what they owe you for doing something for them, is their way of saying that what you did for them is worth enough to ask. That means that what you did is very much appreciated, enough to be rewarded with money.

After hearing those words, I finally felt like a useful participant in human society. I told her that she didn’t owe me anything and that I would be happy to help her again.

I held the door open until they all went through it and closed it. I didn’t want to look at or walk past Mr. Braun again. I went back to the waiting room and waited until they were gone.
The nurse came and sat down beside me and said, “Anna, you were great. Thank you for helping Mrs. Braun like you did. That made all the difference in her visit today.”

On my way to school, I realized what freedom I had, while feeling sorry for Mrs. Braun. I felt guilty and not worthy of it as I thought about how I had the choice to go to school, which had already opened up a world of possibilities by finally allowing me to read, while she had no choice but to go with her husband.

I couldn’t imagine her having any of her own choices. Just like so many of the women I had left behind in my colony in Mexico.

I got to school just as it was break time. I explained to my teacher why I was late. She said, “That’s okay, Anna. Not too many people can work a fulltime job, show up at school on time every day, and hand in completed extra work. I’m amazed that you’ve been able to do it for this long. You are free to take time off, especially if the reason is to do what you did today.”

I went to work feeling accomplished and proud. That was until I walked into the factory. A chill went up to my spine as Christina and Rick crossed my mind. It hit me like a ton of bricks and I felt like crying again. I looked up and there was George walking toward me, noticing that look.

“Hey sweetie, how are you holding up?” he asked, and the tears just started rolling down my cheeks.

He hugged me and said, “I know, Anna. This f#cking sucks,” as he struggled to fight back his own tears. Sadly, the bell rang, everyone but George left, and Bree walked in.

She said hi in an awkward-sounding voice. She gave us a half fake smile, put down her backpack, and went to work. In a sad voice, George said, “Well, I better let you get to work.
Talk to you soon,” and walked out.

There was nothing but empty sadness in the atmosphere as I started working. Eight hours of that quiet sadness got me thinking really deep thoughts about Rick and my grandfather’s suicide, my whole family, and Mexico. I wondered how and what they were doing. I decided that it was time to write a letter to my family.

At break time I thought I could go to Hilary’s office and ask him if I could have a piece of paper and pen. Besides, I thought I could benefit from the sound of his therapeutically hypnotizing voice. I took any chance I could to listen to him speak to me.

I just knew that I had made the right decision when I heard him say, “Absolutely, Anna. Here, take a whole pack. May I ask what you need it for?”

“Sure, I want to write a letter to my family in Mexico. All that sad quietness is making me think of all the things I need to tell them before it might be too late,” I answered.

“In that case, here are some envelopes and stamps that you will need. How is everything, how are you doing?”

“I am doing okay most of the time. After what happened with Rick I almost forget about what happen here such a short time ago. But every time I feel sad about anything George is always there making me feel better.”

“That is great, Anna. I am relieved to know that, he is an amazing friend to have. Sadly, there aren’t too many of his kind left, I’m afraid,” he said. I was thinking, “Please don’t stop talking,” but he did, and I went back to work before my fascination with the sound of his voice had a chance to turn awkward. Click here to continue reading my story.

Email ThisBlogThis!Share to TwitterShare to FacebookShare to Pinterest
Labels: Awkward Mennonite, My Story