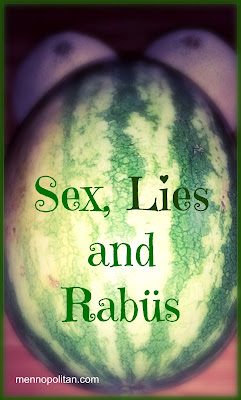 A Mumkjes  Je'schekj is what happens to women’s bodies after they get married. They get bigger because they are not girls anymore, they are women now. It was pretty clear that this was only supposed to happen to married women.  I believe we were told this so we would not question why women would all of a sudden get a big stomach.

I was curious why some girls were getting a big stomach, a Mumkjes  Je'schekj, even though they were not married. When I asked that once in front of a married lady, she had a shameful grin on her face and said, “That girl ate a Rabüs sot, a watermelon seed, and it started growing in her stomach!”

I thought, “Oh no, what is going to happen to me? I have swallowed so many watermelon seeds I can’t even count. I am going to get huge.” I had nightmares that all the Rabüs sot I had eaten were growing in my stomach, all at the same time.

I was so scared, I thought to myself, Dios mio, “If I don’t explode where would they come out and why didn’t anyone tell me before I ate them?”  There were many girls this Mumkjes  Je'schekj was happening to in all the colonies around us.

Some got married right away but this all depended on what time of the year it was and if they had started the baptismal process yet. You cannot get married until you are baptized.  In Mexico the Old Colony baptismal process starts around Easter and ends in mid-summer.

That is the only time of the year you can get baptized.  If it was too late you had to wait until the next year.  If someone swallowed a Rabüs sot in the summer, the families would try really hard to hide it. The girl would no longer join the youth on Sundays.

In a colony not too far from ours, lived a widow with a daughter who had eaten a Rabüs sot and she was getting a Mumkjes Je'schekj and the watermelon grew big in her stomach. Then they went to the town of Nuevo Ideal and the next day they come home with a baby girl.

We were told that the widow had bought a baby. Then, a couple of months after that, the daughter was married and we got to go to that wedding.  The daughter was wearing a duak, a head covering, and she did not look happy at all.  This was common. I often wondered if people got married just because they had eaten Rabüs sot.  It got really mixed up in my wandering mind.

At the wedding we were told that the newly married couple would take the baby home to raise as their own because the bride’s mom was too old to raise the baby.  I was so confused as I tried to make sense of it all.

The girls that were getting a Mumkjes  Je'schekj  wore a duak in church while they were getting baptized because they ate Rabüs sot?  I was thinking, “Watermelons are causing all this? Who knows what other Mumkje s Je'schekj-causing fruit I should stay away from?” This caused me so many sleepless nights!

When we were old enough to do the dishes and clear tables at weddings, we would overhear the married women talking about how shameful it must be for the parents of a daughter that got married with a duak.  I was thinking, “Oba Dios mio. How big is this Rabüs problem and why isn’t someone telling women not to eat this bad fruit anymore?”

As far as I was concerned, it was very simple: Stay as far away from watermelons as you can or, to be sure, just don’t eat anything with seeds in it. And what about all the sunflower seeds people were eating? 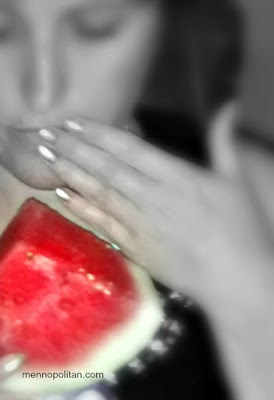 Again, like so many other times, I wanted to know how and why things were happening.  Everyone else just carried on and never asked any questions.  But I couldn’t do it. The mystery haunted me. I had eaten watermelon seeds a long time before and nothing had happened to me.  My body was shaped like a ruler. How does this happen?

I figured we were part of this and, sooner or later, we would be affected by it and I needed to figure it out. Something told me there was more to it.  So, I worked up the courage to ask my friends what they thought of the watermelon problems women were having and, one more thing, why this wasn’t affecting the men at all.

At first they were shocked that I would even ask about it. They were told not to talk about it but they were curious too.  We talked about it in secret and figured out that all the women this had happened to were over sixteen years old and, since we were all under sixteen, that must be why the watermelon seeds were not affecting us the same way as them.

I thought, “Even if this is true, I still don’t trust this belly busting fruit. I’m sticking with beans and tortillas. As far as I know they are safe. At least beans are really small so if they do start growing I should be okay!”

One of the girls in our group had a theory that made a lot of sense. She said, “Let’s think of all the girls this has happened to.” They all had a boyfriend and she had seen some of them schmunje . We use this term to describe “making out” but it actually means “heavy petting”. She thought that schmunje was the cause of these big bellies because this happened to her sister.

She saw her sister schmunje and months later she got a Mumkjes Je'schekj  and then her parents had a baby. Then, when her sister got married, she took this baby with her, but just that last baby that was born before her wedding. All her other brothers and sisters stayed home with her parents.

This is how we learned about most things.  I later on learned this was the way we were kept from knowing exactly what sex was and how women got pregnant, so that we wouldn’t be tempted to try anything.  But I think not knowing the truth is what got so many girls pregnant before they got married.


If I would have just asked my mom, she would have had a much better explanation for it but, because it was so shameful, I was afraid to ask her. My mom usually had a good way to explain situations without telling me exactly how it was.  She thought I was like most of the other girls who just accepted everything and didn’t care for learning about the stuff that was happening in the colonies around us.