Mennonite Girl gets a Sinking Feeling

Continued from My Worlds Collide

I got up and wiped the Mexican dust off my clothes from sliding down Izaak’s car and went back inside. I was just going to open the box my mom had sent me when my phone rang. I thought, “Man, today went from ‘Nothing to do,’ to ‘I can’t catch a break.’”

I answered the phone and it was Bree. She had heard that a tobacco farm was looking for Mexican Mennonite workers and she thought of me.

She said to be there by seven the next day and explained that it was just a few back roads behind the town. I didn’t need to call or bring a resume or anything. I thought, “Yes, I am going to work tomorrow!” I set my alarm for six a.m. and tried to go to sleep but I was having a hard time. I kept having nightmares about going back to Mexico.
In the morning, I couldn’t even finish my usual instant coffee breakfast. That’s how excited I was to drive my cousin’s car. When I started the car, I felt like I had the world that I was not to be a part of in the palm of my hands. I took out the narcocorrido tape Isaak had left in the tape player and put on Alanis Morissette, cranked it up really loud, and drove to the tobacco farm, dreaming of all the possibilities and things I’d like to learn.

When I got there, I parked the car and got out but a fan was still running. I thought, “Okay, maybe it will turn off by itself.”

The farmer looked really confused and said, “Where are the rest of them? I need twelve of your kind.”

“Ahhh, no more than me. You need twelve skinny girls?”

He said, “No, normally when I make a call out for Mexican Mennonites a couple of vans full of them show up, families of twelve to nineteen.”

“Really? Okay, I will have to make do with one for today. You might not be able to handle this work.  Have you ever worked on a tobacco field before?”

“No, but I picked apples in Mexico,” I answered.

I followed him to the field, “My name is Frank, by the way, what is your name?”

He laughed and said, “Of course it is,” rolled his eyes and shook his head.

I thought, “Really? Your name is Frank and you´re is laughing at me because my name is Anna? Yep, this is going to be a long day.”

He showed me the water pipes and said, “You can lift on the right end and I will lift on the left end, and, on the count of three, we are going to lift the pipe and step over a row of plants and put the pipe down. Do you think you can do that? We are going to do that all day to the whole field.”

When I grabbed the first one, he saw my nails and said, “Wow, those are sparkly! I thought you people were not allowed to paint your nails.”

I told him that he was right.

I told Frank that I was glad the vans full of Mexican Mennonites didn’t show up that day because some of them might know me and call Mexico to tell my mom that I had black sparkly nail polish on.

I thought, “Lucky? I’m not so sure about that yet,” but I knew that any day that I was distracted enough not to think about jumping off an overpass was a good day.

“Me neither,” I replied.

“Really, you too? But you are one of them. How are you trying to figure them out?”

I told him that I wouldn’t be able to explain it. I needed a whole lot more English before I could tell anyone such a complicated story.

He said, “Okay, well, it will be a long enough day. If you change your mind, start talking.”

I thought, “So you can roll your eyes at me again? No way!”

We started working and, before I knew it, it was lunchtime. Frank said, “I am going for lunch now. Did you bring lunch?”

He said, “You really need to eat something and drink lots of water. It is going to get really hot this afternoon. At the end of the field, there is a garden. Go help yourself to anything you like.”

I walked to the garden, picked a few cucumbers, and wiped off the sand. There were peppers, tomatoes, cabbage heads, and watermelons. I remembered the nightmares about watermelon seeds that had caused me so many sleepless nights back in Mexico. As I sat there and forced a few small gurk (cucumber) down, I was thinking about my family and wondering what they were doing.

My mom and we girls used to go to our friends’ house once a week and crochet doilies or embroider tea towels with them. I remembered the last time I saw them we were invited over for lunch and they had Komstborscht, (cabbage soup) with heavy cream, and head cheese with ketchup. I couldn’t finish my bowl of soup because I was too excited to go to Canada.

Even though I always thought komstborscht was too bland, I would have given anything to have that left-behind, half-eaten bowl of it right then and there. I was so hungry for it I could almost taste it. I thought if I would add a bit of hot salsa to it, it would be really tasty. 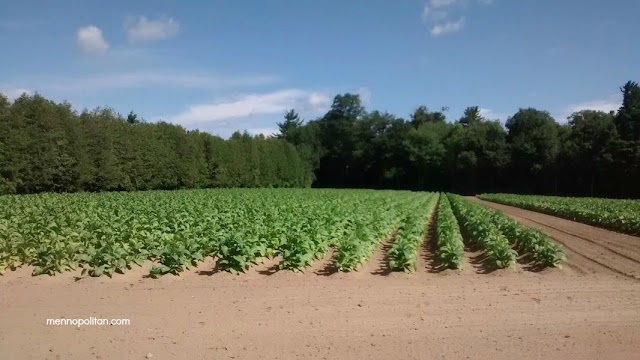 I got up and started walking back to the spot in the field where I worked. I thought, “Maybe that is the problem. Everything tastes too bland so maybe I should buy some hot salsa with the money I get from working here.”

Frank came back with lots of water and gave me a bottle. As we continued working, he said, “At the end of the day you can drive your car up to the garden and take anything you like and as much as you want. We have way too much.”

I got all excited and I started telling him how I hadn’t eaten any vegetables in a long time. He said, "Yeah, I can tell you look like someone sucked the life right out of you.”

“Yeah, that’s how I feel but I’m still alive and working on a tobacco farm!”

He laughed and said, “You sound like you wish you weren’t.”

“Yes, I wish so many things. You have no idea and you don’t want to hear about them.”

He said, “I don’t mind. We have five more hours of work so you have plenty of time to tell me if you want to.”

“No, let’s just keep working. The faster we work, the sooner I get to go home.”

My Low German thoughts told me not to tell him about my dreams because I was still mad at him for laughing about my name, even though he was being very nice to me so far.

We didn’t talk much for the rest of the day and got done a bit earlier than expected. Frank said, “I’ll go to my office while you drive to the garden to pick some vegetables to take home.”

I walked to the car and it wouldn’t start. The fan that hadn’t shut off had killed the battery. I thought, “Oh, great!”

When Frank came back, I told him that the car needed a boost. He said, “Okay, I will send one of the guys over from the other field.”

Shortly, a young guy with long blond hair, blue eyes, cut-off jean shorts, and no shirt came with a truck. He smiled and said, “Can you pop the hood?”

I did and quickly got out of the car. He laughed and said, “The other hood!” I had popped the trunk open instead of the hood. I turned all red and got in the car to pop the other hood this time.

He boosted it and said, “Don’t turn off the engine until you get home. The battery needs time to charge.”

Off I drove to the garden, filled the trunk with produce, and started driving off toward a lane that looked like the road out of there. But it wasn’t the road. It was part of the field that had been watered all day and it was really sandy soil. When I realized I shouldn’t have gone there, it was too late.

I felt the car sinking and it felt like it was going to sink all the way. I put it in park, got out and waved over the shirtless guy that gave me a boost. When he saw how deep the car had gone under, he said, “Oh, crap, why did you turn down this way? This is really bad. I have to call Frank.”

Soon, Frank and five more really tanned shirtless guys in shorts showed up. I didn’t know where to look. I was so embarrassed. I thought, “Vot con dot nach oles geven?” (‘Oh, man, what else is going to happen here?’)

So much for not putting myself into a position where I was alone with a man. There I was in the middle of nowhere on a tobacco field with six shirtless guys and a farmer named Frank pulling my cousin’s car out of the sand. Click here to continue reading my story.