I woke up in the middle of the night from the echoing sound of a coyote howling nearby. My body, tired and aching from all the physical labor of washing the laundry the day before, kept me up. My mind wandered off to a place it had gone many times before. “I should have been born a man.”

Those thoughts were never calming enough to allow me to fall back asleep. When I finally heard mom roaming around in the kitchen, I decided to get up right away and test her to see what would happen if I wore my jeans again. When mom’s eyes met mine, she said, “No! Go put on a dress!” I turned around, went and changed into a dress. That was just the beginning of my day, proving my thoughts right.

While doing chores, I contemplated best ways to convince my mom to let me go to the New Year’s Eve dance with Javier, the Mexican cowboy. I had a feeling that my brothers and many other men from the colony would be at that dance, and they wouldn’t have had to ask anyone. They would just go. My thoughts got very loud and angry.

When my older brother John came inside, I just stared at him, hunched over by the handwashing sink washing the black oil off his hands. I scolded myself, “Anna, don’t hate your brothers just because you aren't one of them!”

While he was drying his hands, he asked if I was enjoying my visit. I just stared at him and said, “Ummm…,” I answered.

That was such an unexpected question. I sensed that John was feeling sorry for me. We stared at each other in awkward silence as I desperately searched for a meaningful answer. It was so complicated I couldn’t answer him simply.

“Hey you know, we just fixed a truck, and we need to take it for a test drive. Would you like to come?”

I got all excited and shouted, “YES! I would,” and asked, “Where are we going?”

“To Patos. Aka Nuevo Ideal. We want to go and eat tacos de tripitas (beef intestines).”

And just like that my excitement left me, “Ahhh okay, yeah, I’ll still come, but I am not eating tripitas!”

Mom giggled as she overheard me say that. I asked her if she had ever eaten tripitas, and she said, “Oba nienich! (Never!)”

We both looked at John, and he said, “You don’t know what you are missing. They are delicious.”

“No thanks, I’ll pass,” I said as I followed him out the door to the pickup.

Riding along the highway in the pickup with my brothers was incredible. The experience was indescribable. That never would have happened before I left. It almost brought tears to my eyes.

As soon as John parked beside the taco stand in front of Hotel & Suites Nuevo Ideal, I felt out of place. There was a crowd of very well dressed tall men in shiny shoes surrounding the taco stand. None of them looked Mennonite or the type of Mexican men I had seen before, but then again I had been gone a long time, and I was practically still a kid when I left.

One of the men came over and greeted us right away. He knew my brothers, and he introduced himself to me as El Guero and shook my hand. As he shook my hand, I figured his nickname could be El Guero because his hands were as white as mine and he had blue eyes.

I turned red like a tomato after I heard myself say, “Soy Anna, la hermana. (I’m Anna, the sister)” as I pointed to my brothers. The way I said it, it sounded like the start of a song. I held my breath and awkwardly looked around wishing for that moment to pass already.

“He visitado el taller de Juan muchas veces, pero nunca te había visto antes. (I have visited John's garage many time, but I have never seen you before?)”

John placed his hands together, rubbed them up and down as he said, “Okay, let's go eat some tacos de tripitas. I’ve been craving them for a long time.”

Not only did I think that I didn’t like tacos de tripitas, I just couldn’t picture myself standing in a group of people on a sidewalk, holding a plate of tacos in one hand while trying to hold a taco in the other and eating it. I pictured nothing but awkwardness and salsa dripping everywhere. I thought, “Oh their shoes! They won't be that shiny when they are done eating. And all that ironing their wives or mothers did for them will be such a waste. What a shame! Ah, kringel! I'm thinking like this because I am not one of those men and I’m quite jealous. But, still, I would need both my hands, free to eat tacos, with lots of napkins by my side.”

I stared at El Guero’s shiny shoes as he came walking back toward me in the pickup. I couldn’t figure out how his shoes could stay that shiny in such dry and dusty desert lands.

“Anna, why aren’t  you ordering tacos?” He asked.

My English and Spanish got all mixed as I explained to him that I wasn’t hungry and he began speaking English to me.

“I have invited your brothers to my New Year’s Eve party at mi Rancho. I would love it if you could come too. You see all those people over at the taco stand?”

“Yes. You mean all those men?”

“Ahhh, yes, those are all my friends and family members. They are all coming to the party.”

“Well, because I am a girl, a Mennonite girl. People in the colony would… Ay caramba! I can't even imagine what would happen.”

“Yes, I know about your people’s strict ways, but Anna, you look like a grown woman to me, and I think you should decide for yourself if you want to come to my party or not. And don’t worry, there will be plenty of women at the party.”

“Sorry, I didn’t mean to be so forward, but when I heard you say that you are a girl I just couldn’t help myself.”

I chuckled and said, “Okay.”

“Why don’t you come into the hotel lobby? My cousin Paula is in there talking to the chef and making a list of food were going to serve at the party. I’d like to introduce you to her.”

“Does she speak English?” I asked.

“Ahhh she speaks Spanglish, kinda like you just did.  I'm sure you will be able to communicate just fine,” he explained, and we both laughed.

“I shouldn’t go in there. If the wrong person sees me go in, I will get in big trouble.”

“Okay, I see how this is going to go,” he said, and suddenly everyone including El Guero and I turned to look at the most beautiful woman I had ever seen in real life, stepping out of the hotel lobby. She looked like one of those telenovela actresses.

“Guero! Necesito hablar contigo (Guero! I need to talk to you),” She shouted.

Every single eye followed her as she made her way to me. “Anna, meet my cousin Paula,” said El Guero.

She shook my hand and said, “It’s really nice to meet you, Anna.”

“Anna, it's too hot out here, why don’t you come inside?” asked Paula.

I looked at El Guero, and he winked at me. My heart dropped to my feet as I thought, “Oh no! You didn’t just wink at me!” and just like that, I was accompanied by George in my mind.

I felt so underdressed and embarrassed to be seen in that crowd with my dust-covered shoes.

In awe of Paula’s beauty, I followed her and El Guero into the lobby of the hotel. “While you two get acquainted, I will go make us some drinks,” explained El Guero.

“Okay,” Paula said, as she waived her hand gesturing him to leave.  She turned back to me and said, “Let me get this straight, you are Juan  El Mecánico’s sister?”

“I am thrilled! Finally, a Menon (Mennonite man) brought a sister along for me to hang out with. Juan El Mecánico just became the coolest Menon in Nuevo Ideal.”

“So tell me everything about yourself. I have been to your colony many times and how come I have never seen you before?”

After explaining my story to Paula, she hugged me, held on to my shoulders and said, “You really need to come to the New Year’s Eve party, in fact, this party should be dedicated to you for your incredible bravery.”

Paula changed the subject and began telling me about the food she was planning on having the chef make for El Guero’s New Year's Eve party. My mouth was watering, as my desire overwhelmingly blanketed me with the temptation to go to that party.

El Guero brought Paula and me a drink and sat down beside me. I took a sip of the drink. It tasted almost as good as it felt going down. It made my taste buds sing a happy song in Spanglish. After each sip of the drink, I felt a little braver, and my worries about being seen by the wrong person in that lobby faded further to the back of my mind.

I enjoyed the Spanglish language conversations and was eager to keep them going. It was fun. It made us laugh, and it took the pressure off of me having to pretend that I spoke Spanish.

“What is this drink?” I asked El Guero.

“It's my version of the vampiro.”

“Well, it's delicious, thank you.”

Every once in a while I noticed every man that came from the back room of the lobby seemed to have the sniffles when they came out.

“So, where exactly es tu Rancho?” I asked El Guero.

“Okay. So, entonces el lugar es un secreto? (So the place is a secret?)”

“No, not necessarily. At least not for the ones who know where it is,” he said and winked at me again. I quickly looked away and took the last sip of my drink, and when I looked back up, my younger brother Abram stood beside me. “Okay Anna, it’s time to go now,” he said.

“It was really nice to meet you, Anna, and I will see you at the party, yes?” said Paula.

“It was nice to meet you both and thanks for the drink.”

“See you at the party, Anna,” said El Guero.

On the way back to the colony, I talked to my brothers about going to the party.  John didn’t seem to mind as much as Abram. He didn’t think that I should be allowed to go.

“Because you are a woman. That’s why.”

“Really? That’s the only reason?”

“Well, and you don’t know those people.”

“John, can you help me convince mom to let me go?” I asked.

“If only I would have been born a man, life would be so much easier for me.”

As John said, “Ummm, I don’t know about that,” I remembered, “Javier! How will I explain to him that I would rather go to this party in the mountains than go to the dance with him?” Click here to continue reading my story. 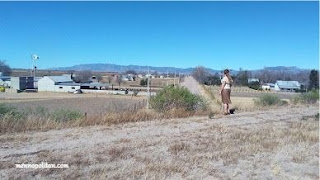