It had been a long time since I wrote anything in High German. I had a really hard time pulling my thoughts together. I had to dig deep to find that memory I had stored away for so long. It was there, I just had to find it.

During my years at the Mennonite school in my colony I wrote plenty of letters. Every Friday we did letter writing. They all began the same way. We memorised a format and then when we actually wrote a letter to our cousins in Canada, we would write it just like we had memorised it and add things like what day of the week it was, what the weather was like and what we had been doing.

We memorised how to write our every-day-of-the-week routine. Monday was the day for laundry and ironing the pleats back into the dresses that we wore on Sunday. Tuesday was cleaning, baking in the morning, and then in the afternoon we would crochet and embroider with friends in the colony. Wednesday we baked, sewed and ironed after we cleaned.

Thursday was hair day (getting new braids), sewing, and baking. Friday we did a load or two of laundry to get through till Sunday, and sewing. Saturday was massive cleaning day -- we washed all our furniture, windows with Pine Sol, raked part of the yard around the house, and baked tweeback and sweets for faspa on Sunday.

If we ever did something out of the ordinary -- for example, the few times we got to go to the feria (fair), or going to the town of Patos Nuevo Ideal -- we would have no idea how to write it. Most of the time our mom knew and she would write it down for us. We kept a list of those words for the next time we might need to know how to write them.

As I began to remember how to write a letter, I thought, “Maybe I should just call home,” but the more I thought about how complicated that was, I began to think of all the reasons of why that would be a bad idea. I did not feel like doing what it took to make it all happen:

It was exhausting, and not to mention really expensive, to call Mexico. I didn’t have the money, and all I did on the phone was explain to my mom that what she had heard about me wasn’t true anyway. Every time I hung up the phone after talking to my mom, I felt so awful and guilty about the choices I had made and what I had done to her, I just wanted to die.

By lunch break I was back to writing a letter instead. I started and then would slowly drift into thinking, “Hilary is such a nice man to give me all the things I needed to write this letter to my family.” I would pull myself out of that and write for a while and then I drifted off to the dream I had about George, then my stalker, then Rick’s suicide.

I didn’t know how to write about anything that was on my mind. I got back to writing about the weather, that I was working in the factory again and that I was still alive. I thought that would cover all the basics and decided that that was all they need to know. Whether they would accept that was a whole other story.

While writing the letter I began feeling so guilty again, about all the things I was doing like shaving my legs, wearing pants, and lip-gloss once in a while. And the most sinful of all were the thoughts I was having about George after the dream I had had. I thought “Dois Mio, I’m in so much trouble.”

The guilty feelings became such a pattern. I was feeling good about the choices I had made when I thought about my own well-being, especially my nerve problems. It was such a battle between what I had been taught was wrong and sinful and what I was learning firsthand. I wanted to please my mom but I also wanted to experience life on my own terms.
Growing up in my colony I watched many women being treated like Mrs. Braun. All of that was not spoken of. I remember getting in trouble often for suggesting that there was something wrong with that and that those women deserved better. I was selfish to think that a woman would think of herself as “deserving” anything.

“Why can’t you just accept and do this like everyone else does? What makes you think you are so special that you don’t?” said my aunt, who thought that I just needed a good old spanking to set me straight. 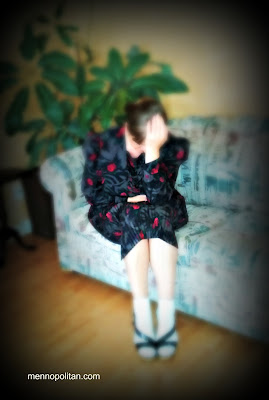 After revisiting that memory, I was feeling good and confident about making my own decisions again. Until the next time the guilt monster ate me alive. When I thought, “What if my aunt is right -- will I have to pay for all my selfish joy with sorrow later?” It was a constant battle that kept me on my toes and made my nerve problems worse.

Many times I thought, “Do I want this bad enough for it to be worth it? What if I went back home, forgot about all of this, and went back to the way things were before?” Then reality set in again. “That could never happen, not after all those rumors that went around about me.”

I went home feeling terrible and exhausted. I went straight to bed.

The next day at school while sitting at my usual spot at the table in the cafeteria, laughing at Steve and Chung’s jokes, Steve asked if I would like to go clubbing with him and his friends on the weekend.

“You can think about it and call me if you decide you would like to come,” said Steve, and he gave me his phone number.

“Okay, I will think about it,” I said, and thought, “This sounds a bit more tempting than when that dude told me if I ever wanted to experience the time of my life, that I should go party with him.”

I left school early, picked up a cappuccino for Christina, and drove to Christina’s house. She was home all by herself, she looked so pale and sad. She tried to be happy that I had thought to bring her a cappuccino, but she was still way too sad, she couldn’t even fake a smile.

I tried to convince her to just come back to work because that was the only thing that I could imagine I would do. I left her house feeling like a hopeless failure of a friend.

When I got to work I was hoping that I would run into George. I hadn’t seen him in a while, and I missed him. I desperately needed one of his chin up, deep breaths, and smiles only pep talks he always gave me. But instead, I ran into Bree in the bathroom.

She was all dressed up and wearing makeup. I had to look twice to be able to recognize her. I was afraid she might show me a new piercing she got, but instead, she said that she was going to a club after work and asked if I’d like to come.

“I think I would like to, but I have to get up early in the morning to go to school,” I said.

“It’s Thursday night and you could miss one day of school, couldn’t you? You will be missing out on a great time.”

“Maybe next time,” I answered.

I couldn’t even imagine what it would be like to go clubbing with Bree. I had been invited to go to clubs and clubbing by three different people. It got me thinking, “What exactly is clubbing, anyway? I’m going to look it up in the dictionary as soon as I get home.”

The entire shift all I could think about was how I could make my sad friend Christina happy again and how I missed George. By the end of the shift, I had convinced myself to check and see if George’s lights would still be on when I got home. And maybe I would go talk to him for a little while.

Sure enough, his lights were still on when I pulled up to the parking lot. My heart started pounding immediately. I got more nervous as I walked up the stairs into the hallway. I walked past his door a few times and listened carefully. I could hear that his TV was still on. I stood there for about five minutes to work up the courage to knock on the door.

Finally, I just went for it and knocked. He opened the door and it was just like the last time. He saw my face, put his arms around me and I began to feel myself getting lighter with each breath I took. He made me a cup of tea and turned off the TV.

As he handed me the tea he asked, “How are you doing?”

“At the moment I am wondering, what is clubbing? I got invited by three different people and now I am really wondering what it is,” I answered.

He explained what clubbing was and said, “Now you got me all curious, who asked you to go clubbing?”

“A man that everybody calls dude, you know the one that works in shipping on the afternoon shift?”

He looked at me with one eyebrow raised and said, “Ahhh… yes, I know that one. And who else asked you?”

Steve, a guy that started school a few days after I did. He’s the one that ran into a post on his bike and hurt himself badly because he was staring at my dress. And Bree asked if I wanted to go to a club with her tonight.” I answered.

“Really? Bree asked you to go clubbing with her tonight? Did she tell you what club she goes too?”

“Hmmm… okay, next time you see her, ask her what club she wants to take you too.”

I looked at the clock. It was past midnight. I jumped up, walked to the door, and said, “I have to go to sleep.”

The next morning I woke up to a loud knocking sound at my door. I got up, tiptoed to the door, and peeked through the peephole. When I caught a glimpse of who was standing that close to me just on the other side of that door, my heart skipped a beat and dropped to the floor. Click here to continue reading my story.

Email ThisBlogThis!Share to TwitterShare to FacebookShare to Pinterest
Labels: Guilty Mennonite, My Story