Continued from A Mennonite Blast

Since it was Saturday, and since when I threw the pen across the room it got all dusty, I decided that it was time to clean my apartment with Pine-Sol again. I put the TV on and just left it on a random channel as I began cleaning. That’s when I realized that the smell of Pine-Sol had an uplifting effect on me. That smell made me feel like I was still part of Mexico and my family.

I thought about it and realized that whenever we had cleaned with Pine-Sol back home we had had something to hope for. We were either getting ready for company or the next day would be Sunday. Saturday nights, when our house smelled like Pine-Sol, I would lay awake in bed hoping and wishing that the next day someone would come and change up our regular, boring routine.

It was rare that we would get visitors, and when we did it would be around Christmas time. That’s when all the people came back to Mexico from working in the cucumber and tobacco fields in Canada.

Just as I was thinking about that, a commercial came on TV that played a song that took me right back to one Sunday in particular. The song was “Red, Red Wine.”

It was the Sunday when Johan Dyck from Hochstaed and Cornelius Krahn from Neustadt came to my colony. Johan was my step-cousin -- my Grandma had married his grandpa about seven years after my grandpa’s suicide. I knew Cornelius’s family well -- they were my grandparents’ neighbours while they lived in Neustadt.

Cornelius was dating my friend Katharina who had lived in my village but later moved to a smaller village across the main highway. Johan had a car that he had brought back from Canada. While picking her up, they had decided to drive through my village.

My friends and I were doing our usual sitting under a tree eating sunflower seeds. My heart started racing when I saw them pull up to us. Johan parked the car, walked straight up to me, and asked if I wanted to go with them to his village. I didn’t think twice -- I got in and we took off, leaving all the rest of my friends under that hopeless tree in the Mexican dust. 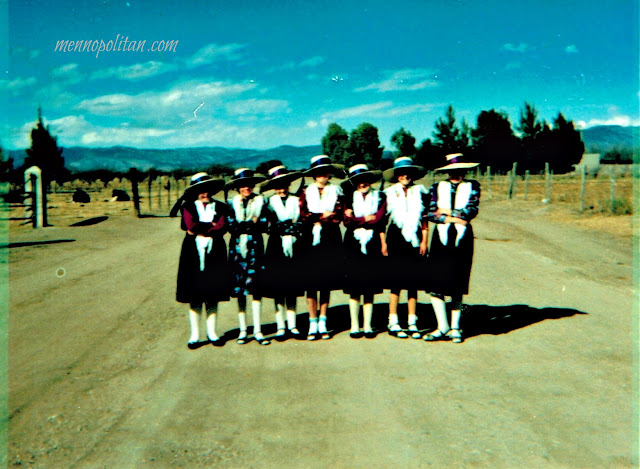 As he pulled up to the main highway he turned on the stereo, and that was the first time I ever heard the song “Red, Red Wine.” That was the most exciting thing that could happen to any of us, and he had asked me, out of all those girls. That made me feel special.

I thought Johan was the best-looking dietscha Jung (Mennonite man) I had ever seen. I could tell that he had learned a thing or two in Canada about how to treat a girl. We drove to Patos (Nuevo Ideal), where Johan and Cornelius bought a few beers and a couple of bags of Rancheritos chips. Johan picked up a few grocery items to bring home.

We went to Johan’s village. That was the first time I had ever been to Hochstaed. We went to his house to bring the groceries to his mom. She invited us all in to sit and have some sunflower seeds in their kitchen. We sat and talked to her for a bit before we left.

We drove back to the main street of Hochstaed sat down under a tree, Johan and Cornelius opened a beer each. Katharina and I just took sips from their beers and ate the chips while listening to “Red, Red Wine” and a song called “Free Fallin’.” I was shocked when I heard the singer mention Jesus (“She loves Jesus, and America, too”). I had never heard a song about someone loving Jesus before.

I wasn’t sure how I felt about that. We knew beyond a doubt that hearing mention of Jesus in a sinful situation (such as listening to music) was a sin. I felt awkward about feeling joy when Jesus was mentioned in this way.

Though I had never heard the exact words spoken aloud, I was sure it was wrong to feel joy while Jesus was talked about. But then again, I was a hard learner and I had nerve problems. I may have missed this important message somewhere. I just knew it was something we didn’t do. Whenever Jesus or God was being talked about everyone was very sad. That was such a serious topic and never a joyous one.

We had only ever listened to narco corrido songs before. Songs about narcotic trafficking, murder and fleeing from the authorities -- those were popular songs. Listening to music was such a big secret that almost everyone did privately. We didn’t know anything about picking music. We just listened to whatever was playing on the radios or anything we got our hands-on.

By five-thirty, they dropped me off back in my village and when Johan asked if he could visit me that night, I almost jumped out of my skin as I said, “yes!” I was so impressed that he at least asked before just assuming that he was my boyfriend after sitting under a tree and sharing a beer. He wasn’t like the guy who just put his arm around me. He didn’t force his drunken slobber on me like Jake Dyck had done. I was delighted.

When I got home that Sunday my mom was furious with me for going with them. We were not allowed to ever leave our village, especially not with guys who came in a car and who had been to Canada. I had already known that -- I had hoped that she wouldn’t find out about it before I got home. I thought if I explained it to her she would at least hear me out before getting angry.

Deep down I knew that the news would get to her faster than I could say “Oba, wacht en bätje (But wait a bit)”. My mom grounded me and I was not allowed to see him that night. She told me, “When Johan gets here tonight, your brother can go outside and tell him that you are not allowed to see him.” And that was the end of that.

I was crushed.  That was, until the following Sunday when Johan came back during the day to visit me again. I spent the whole day with him under that hopeless tree in my village. Him being under that tree with me made it seem hopeful. I explained what happened and he wasn’t surprised by that at all.

We talked about how stupid we thought that the whole thing was. We were both Old Colony, and many Old Colony people (including my dad) had been excommunicated at one time or another for driving a car. But I was not allowed to see him because he drove a car. We just didn’t get it.

I enjoyed his company. We got along so well, we were becoming really good friends. I was so happy that we could actually be friends -- that didn’t happen between a male and a female much in a Mennonite colony. You were either boyfriend and girlfriend or nothing.

I had a strong feeling that that wouldn’t last very long. It was too much fun. And too much fun never lasted. The next Sunday he came to tell me that he was leaving to go work in the US. I never saw him again. All my friends were as heartbroken about it as I was.

My mom was thrilled. She didn’t have to worry about me going places with this “bad boy.” None of our moms actually knew just how bad some of the boys were who dressed “Old-Colony appropriate” and who didn’t have cars to go explore. Every Sunday we were stuck with them, for hours and hours, Sunday after Sunday, because of it.

I returned to reality. While I put the Pine-Sol away I told myself to stop thinking about those hopeless times. The time was going way too slow for me, especially after that long walk down memory lane I had gone on, thanks to the smell of Pine-Sol. I couldn’t wait for that motorcycle ride. I thought I might have to stop cleaning with Pine-Sol or my nerve problems could get worse.

That wouldn’t be easy, though. I didn’t know about any other cleaning products. Pine-Sol was one of the things that were not so different from Mexico. I thought maybe I could ask George what he cleaned with and switch to that. His place always smelled amazing, just like he always did during his hugs which were unlike anything I had ever experienced before.

After thinking about all of that, I was reminded of some of the reasons I had chosen the path I had. I remembered that I was actually doing well in school so far. I began to question if I really was a hard learner. I thought maybe that teacher in my colony just hadn’t known how to learn me.

I was beginning to realize it more and more that letting George and that nurse convince me to go to school was the best decision I had made so far, even though I had been so frightened about starting school all over again. I got my books back out again and actually managed to get the majority of the work done.

Finally, the time had come to get ready to go on a motorcycle ride again and meet George’s mom.

Getting ready to go on a motorcycle ride was easier this time around since I had done it once before. I knew how to get ready although I was secretly wishing George would braid my hair again. I put a pair of jeans and a t-shirt on, combed my hair all to my right side, and braided it. I was too embarrassed to leave it open because I thought then it would be too obvious that I wanted George to braid it again.

I put my boots, my jacket, some lip-gloss on, and off I went to knock on George’s door again. I realized that I was a little less nervous and a bit more confident each time I walked down that hallway. I began feeling a bit less guilty about doing something that I thought perhaps I shouldn’t. Especially after I had survived a crazy stalker.

Those thoughts vanished just before I got to George’s door. They all of a sudden turned into a reminder that it had only been hours since the bomb threats and the massive manhunt that I had been in the center of. That a man I knew very little about was in jail because of me and that he might be REALLY pissed off at me now. I quickly turned my focus to breathing because I was starting to feel like I was going to throw up again. Click here to continue reading my story.

Email ThisBlogThis!Share to TwitterShare to FacebookShare to Pinterest
Labels: Hopeless Mennonite, My Story