Continued from So what?

I put my idea into practice for the first time at the bank. I recognized a young couple who were from my colony standing in the lineup in front of me. When they saw me, they began to whisper to each other while glancing back at me, making it obvious that they were talking about me. I decided to smile and wave at them every time they turned around and looked at me, even though my heart was pounding with rage, thinking to myself, “What did I ever do to you?” When I saw them struggling while dealing with the bank teller, I left my place in the lineup and walked over to offer my help.  I endured an awkward few moments of them staring me up and down because of how I was dressed, before they accepted my offer to help.

After the bank teller and I watched the couple leave with bank cards, cash in their hands and smiles on their faces, the bank teller said, “Thank you so much for your help. They would have never been able to open a bank account without your help.”

I decided that the couple didn’t say thank you because they were speechless and in awe of my generosity. I left the bank feeling good about my actions, knowing that there was more where that came from and that I was the source of it. After that realization, I grew, and became more comfortable in my own skin.

I was well on my way to building a new reputation for myself after having multiple opportunities such as the one at the bank on many different occasions. And then I was ready to throw it all away when I ran into the Brauns again, knowing that they were the ones who were spreading gossip about me causing my family hardship in Mexico.

I had a week off between the end of the spring semester and the beginning of my summer semester.  I invited George to walk with me to a doctor's appointment, which is where I ran into the Braun family. They had come back to Canada to work in the fields for the summer. They were visiting the doctor’s office with yet another new baby. Not much had changed. Mr. Braun sat in the van smoking, while mom was inside with all the kids and her new baby. Mr. Braun stared us up and down as we walked past the van. George saw how angry I was getting. He pulled me aside and gave me a pep talk before entering the building.

“Anna, just breath through it.  I know this isn't fair, and I want to do nothing more than take that f#cker to the back and beat the shit out of him, but that’s not who I am so I'm not going to do that.”

I just stared at George.

“Remember your plan about changing people’s minds about you?”

“Yes, but I don’t want to anymore. I hate these people!”

“I know, but Anna, this is the perfect opportunity, and I will help you.”

“Okay, then take a deep breath.”

I swallowed my pride and followed George’s instructions. Mr. Braun quickly looked away, pretending that he didn’t see me. When we entered the building, this time I didn’t ask George to sit across from me instead of beside me in fear of Mrs. Braun’s reaction to him. But it didn’t seem to faze her. She looked overwhelmingly sad and depressed, the same as the last time I had run into her there. I offered to hold her baby when she needed to attend to her toddler, and she accepted my offer and handed me the baby. When the nurse called her name, she asked if I could watch her kids while she and the baby went with the nurse. I agreed.

This time when I read books out loud to the kids in front of George, I realized how much confidence I had gained since the last time I had done that.

I compared my experiences and thought, “Okay, I left the couple at the bank speechless, Mr. Braun still hates me, but Mrs. Braun doesn't care how I am dressed or the fact that George is here with me. I’ll start with that.”

On the walk home, George said, “What you did there, that took a lot of courage. I’m so proud of you, Anna.”

“Thank you. My heart is still pounding.”

“When you hear any negative gossip from your community in Mexico, or anywhere for that matter, don’t dwell on it. And most importantly, don’t explain yourself to anyone, just keep doing what you did today, and eventually, that will take over. I guarantee that it will kill the negative gossip. It may take a while, but it will work. Remember how long it took you to trust me?”

I covered my face with both my hands and said, “I know! I’m so sorry.”

“It’s okay. I didn’t exactly make it easy for you.”

“I can only imagine, but let's not focus on that.”

“So, what are you going to do on your only week off this summer?”

“Sit at the library and learn.”

“Anna, I hate to tell you what to do, but I think you need to take a bit of a break from learning, don’t you?”

“You should go to the beach or something.”

After George left for work, I stopped in at the library and picked up a few books, including one on building trust with people who hate you and another about human emotions, and off to the beach I went to learn. I began to better understand my emotions, and to realize that humans are meant to have exactly the kinds of emotions I was experiencing. I learned that building trust took small, consistent, repetitive, genuine actions, gestures, and smiles over some time.

I sat at the beach until I was the only one left, and watched the sun fade behind the water.

When I got home from the beach, I had a message on my answering machine from the nurse at the walk-in clinic. She wanted to know if I would be interested in interpreting for Mrs. Braun the next time she had an appointment. I couldn't believe it, thinking Mrs. Braun spoke better English than I did. I called the nurse back first thing the next morning and explained that to her, and she said, “Actually, Anna, she doesn’t speak more English than you do. They only come here for the summer, and she’s very isolated; she doesn’t leave her house, and I am concerned about some things that I would like you to help me explain to her.”

“Okay, yeah, sure. If you think that I can help, I would be happy to.”

“Great! Thank you so much, Anna. See you soon.”

I had no idea what I was doing, but I took my time explaining the nurse’s concerns to Mrs. Braun, to the best of my ability. Mrs. Braun didn't say much, but it seemed that she understood what I was explaining to her. I told her that she could call me if she needed to talk to someone, or if she wanted me to explain everything to her again. She said, “Okay,” and took my phone number.

After Mrs. Braun left, the nurse put her hand on my shoulder and said, “Thank you so much, Anna, that went really well. Can I call you to interpret again sometime? I have a few more clients who need clarification on some of my concerns.”

“That’s great, Anna; you are a natural at this.”

The nurse’s encouraging words were such a confidence booster for me. Whenever I ran into a Dietsch person, male or female, I acknowledged that I was one of them by saying, “Goondach (hello)” with a smile, and leaving it up to them whether they wanted to speak Dietsch to me or not. If they did, I happily responded. It got to the point where I was eager for any opportunity to explain myself to anyone who was curious, and that turned my life around.

My nightmares about drowning on my way to Posen Land and windmills yelling at me disappeared. I grew confident in my ability to place each of the puzzle pieces that had become my life in its rightful place as I collected it.

The next time Mom called and told me that she had heard that I was seen at the doctor’s office with a ‘schwiennoagel,’ I explained, “His name is George, and he's my friend. I invited him to come along to my appointment so that I wasn’t alone.”

“A checkup for what?”

“To make sure that I'm healthy and that I stay that way.”

“Okay,” she said, and then there was silence, because that was a foreign concept in the colony. In the colony we only visited the doctor when we knew we were sick, or if something hurt.

Then mom said, “Mrs. Braun’s sister told me that you had helped her sister at the doctor’s. She said that she was surprised that you helped her as you did.”

I did a little happy dance.

“It was George’s idea. He’s a good person, you know, and I am becoming a better person because of him.”

“That’s good,” she replied, and proceeded to tell me how things were at home. For the first time after hanging up the phone with her, I didn’t feel guilty and terrible about myself.

After I finished my summer courses, I had an opportunity to speak with my employment counselor, Sharon, when I dropped off my report card. After signing the paperwork for me to be able to continue on unemployment for another semester, she told me how impressed she was with my progress, and asked if I would consider going to college.

“I will be lucky if I get through the courses I need to get my Ontario secondary school diploma,” I explained.

“Well, I think you should definitely discuss your options with your guidance counselor.”

“Okay,” I said. But I didn’t think that I needed to, because I was sure that someone like me would never get into college. During a class discussion on career day, we were encouraged to think about our interests and possible career options. I had never been asked or even dreamt of what I wanted to do when I grew up, so I sat back and listened to the people who were sure, and had a plan.

“What about you, Anna?” the teacher asked.

“I’ll be lucky if I get another factory job and don’t end up picking cucumbers or working on the tobacco fields,” I answered, and I accepted that that was good enough for me.

My friend Steve finished his last course, while I still had a whole semester left. By then I was able to write fast enough to take my own notes fairly well, and didn’t have to rely on Steve’s help anymore. I had gained enough confidence to be okay with starting a new semester with no one I knew sitting beside me. My first day of class without Steve, I was the first to arrive, as always. I placed my notebooks and pencils neatly on my desk, sitting tall and confident, ready to learn.

I closed my eyes, took a deep breath, and hoped with all my heart that whoever would come and sit next to me would be nice like Steve was.

“Are you praying for the class to be over already?” asked a voice behind me. Click here to continue reading my story. 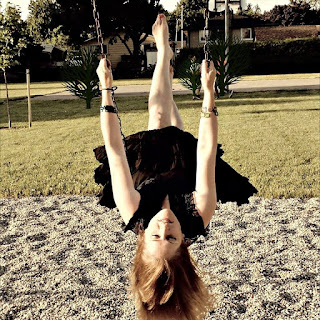