Continued from While in Mexico

I quickly sat up and listened carefully, thinking that I could be wrong. But I heard right. It was Aaron Newdorf. He was drinking, socializing and appeared to be having a great time. That bothered me a lot, especially because as long as I’d be hearing him, I wouldn't have any peace. I thought, “How can I stop being afraid of him?” and talked myself out of freaking out. But that was hard work.

I continued stargazing with my little sister. Every time I heard footsteps near us, I panicked. I finished my drink and kept an eye on Izaak, and I thought, “I can really use another drink, and the minute he goes to mix himself one, I’m going to get myself another one too.”

When Izaak finally went back to his car, I told Maria that I would be right back, and snuck my way to Izaak’s car. “Hey, can I have another one of those?” I asked.

“Hey! Yeah, sure. Ahhh what’s going on? You look worried.”

I wasn’t sure if I should tell Izaak about Aaron, because they had been friends for a long time. So I just talked about the car he left me in Canada.

“Thanks for letting me use your car. It has helped me out a lot.”

“But I can’t tell you what shape it will be in when you need it back. My brothers would be disappointed in me if they knew that I have never even opened the hood of your car, or even had an oil change or anything.”

“Its, okay, Anna. I don’t care if you drive that car into the ground. I am making pretty good money working in Texas; I will just buy another one if I ever come back to Canada.”

“But yeah, you should go and have an oil change done on it soon.”

“Sounds good. I will do that.”

“Okay, enough about my old car. Why do you look so stressed?”

“I have had a long day and I really just want to go inside and go to bed, but I can't until my parents’ company leaves.”

“Okay, is that all? Because I think there’s more to it, and you know that you can tell me, whatever it is.”

“Ahhh, well, actually you're right. There is a lot more to it.”

“It’s more like who, and it’s Aaron Newdorf. What is he doing here anyway?”

“I knew it! He just showed up. He thinks we are friends just because we go way back and he's got no other friends left.”

“But I thought he had a girlfriend in Potes.”

“He did, but I think she was a smart one and realized what an asshole Aaron actually is and dumped him.”

“I don’t know how he manages to make enemies wherever he goes.”

“I kinda feel sorry for him. Most men our age are married by now. It doesn’t leave him with a lot of friends to hang out with here in the colony. Especially when the holidays are over, and most of us leave.”

“Are you still planning on going back to Texas with Uncle Jake and me?” I asked.

“Me too. It'll be fun. I can't wait to take you out and show you around Texas.”

“Soon enough, Anna,” Izaak said, and laughed as he handed me the drink.

“I wonder why Aaron doesn’t go to the states or Canada,” I asked.

“I don’t know if everything I have heard is true, but I might as well tell you what I do know for sure. Aaron has gotten into a lot of trouble lately, mostly because of the people that he has gotten involved with. I didn't know if you know, but there are these groups of people.”

“You mean the narcos?” I interrupted.

“Okay so when he told me that I was surrounded by a bunch of narcos at El Guero’s party, he was right?”

“I thought he was just trying to scare me. I also thought that narcos weren't real. I thought that they were only in movies and telenovelas.”

My heart began to skip beats as our conversation continued and everything began to make sense.

“Okay, so is Aaron involved with El Guero’s people?”

“No, it’s a different group. The way I understand is that this group and El Guero’s group are enemies.”

“The only reason El Guero’s men let Aaron through the gates of El Guero’s ranch last night was because he is also one of us.”

“Yeah, that and I think El Guero likes to keep an eye on Aaron in case he gives out any hints on the whereabouts of  El Guero’s enemies.”

“Yeah, but unfortunately for Aaron, it has become very real. I have a feeling that he is going to get himself in so deep that one day he won't be able to bullshit his way out.”

“I should have been talking to you a long time ago.”

“Well, I’m glad you did tonight. When I saw you at El Guero’s party, I wanted to talk to you about this, but I didn’t want you to think that I was telling you what to do or who to be friends with. You have enough people doing that already.”

“What about El Guero?”

“I know that he likes you, he likes you a lot, and that he would never purposely hurt you. I’m no one to tell you what to do, but given the business he’s in, being around him does put you at risk every time. I don’t know all the details, but there is a lot of bad blood between the people that Aaron is involved with and El Guero.”

As I listened to Izaak, things began to make a lot more sense. I began to feel a cold shiver going up my spine, and I thought I was better off not knowing what Izaak had just shared with me.

“So that’s why El Guero has that many men with guns around him all the time, in case those guys show up?” I asked.

“Something like that,” and our conversation got interrupted by Maria calling me to come back to the blanket.

I went back to join Maria on the blanket until my parents’ company left and mom called Maria and my younger brother in.

After Maria left, I sat there alone and sipped away at my drink. I took a deep breath and lay down and exhaled with a sigh, gazing up at the sparkling, star-filled silver night sky. I felt the tequila massaging its way through my body as I became one with my vampiro.

I briefly closed my eyes, and thought I was having a nightmare when I heard Aaron’s voice say, “I hope you are thinking about me.”

“I jumped to a seated position and said, “NO!”

Aaron sat down beside me anyway, “I really need to talk to you. This might be my last chance.”

“Do you even know what the word NO means? I think you have YES and NO mixed up!!! No means, don’t sit down.”

When I heard him say “I’m sorry” for the second time, I said, “WHAT?” as I jumped up to a standing position.

Aaron stood up. “I’m sorry. I have no excuses. I am an asshole,” he said. He got down on his knees in front of me, placed his hands on my shoes and kept saying, “I’m sorry.”

“REALLY?” I asked, as I backed away and hoped that no one was looking in our direction.

“Okay, okay, just get up!” I said, and sat back down on the blanket.

Aaron sat down facing me, covered his face with his hands, and said, “Look, Anna, I don’t expect you to forgive me just like that, but I just want you to know that I really am sorry for the way I have treated you. I realize that now, and I see how the people you are drawn to treat you.”

I was in disbelief. I didn’t know if I believed that he was for real or if he was trying to manipulate me.

“You don’t have to say anything. I don’t deserve your forgiveness. I just wanted you to know that I am truly sorry.”

After sitting there for a moment and processing it all, I began to believe that he was being sincere. I thought, “Maybe if I accept his apology I can finally put that stupid mason jar to rest. It's too big and bulky for any purse.”

Looking at him sitting there like that, I began to feel sorry for him. I didn’t want to, but I talked myself into accepting his apology.

I looked at him again and thought, “Look at this oma schetat. He seems dead inside. Say something, Anna!”

Looking at him and remembering all the horror he put me through, my whole body shivered with disgust.

“Maybe you should hit me!” he said.

“Anna, I don't want to leave here tonight until I have convinced you that I really am sorry. I wish that I could go back in time and start over, but I can’t.”

“But I don’t want to hate you anymore.”

“Okay, then let me show you how sorry I am and let me give you a hug.”

“Wow, you have some nerve!”

“I will leave right after. I promise.”

My heart was pounding. I really wanted to hit him, but in spite of my shaking body and feeling like throwing up, I got up and accepted his request. He got up and looked at me for a moment before putting his arms around me, barely touching me at first. I stood there like an ice sculpture. When he pulled me closer, hugging me tight, I noticed that he was crying.

“Thank you,” he said, and dropped his head down as he walked away.

He left me standing there speechless and shaking, as I watched him walk away into the darkness, off of Uncle Jake’s property, wondering what the heck had just happened. And why the sudden change in Aaron’s behavior. The whole experience left me with an unfamiliar and odd feeling.

I snuck my way past the crowd of men still standing around the bonfire and walked across the property to my parents’ house. It was quiet in the house.  I assumed that everyone was sleeping.

I tippy-toed inside, took my mason jar and snuck back outside. I walked to the back of the property to my dad’s pile of old tractor parts and smashed the mason jar against a rusty old rim.

On my way back to the house I thought, “I’m going to have to clean that up tomorrow before dad sees the shattered glass.”

I lay down in my bed, focusing on the smell and the twinkling flame of the burning kerosene oil lamp.  As my day faded away, I wondered if I could really put Aaron Neudorf behind me for good. Click here to continue reading my story. 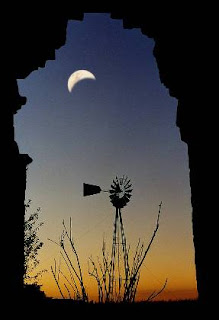 Email ThisBlogThis!Share to TwitterShare to FacebookShare to Pinterest
Labels: Mennonites and Vampires, My Story