I took a bite of the quesadilla and started telling him how I learned about why a girl in one of the colonies who wasn’t married suddenly got a big stomach. I was told that she had eaten watermelon seeds and they were growing inside her.

I took another bite and dared to look at him. He was eating and looking at me with one eyebrow raised and a big smile on his face and asked, “And then what happened?”


“Well, I had eaten from a big watermelon and swallowed a bunch of seeds and I was terrified. I thought a watermelon as big as the one I ate from was growing inside of me. I had nightmares about that for a long time,” I explained.

He had a hard time keeping a serious face as I continued telling him, and the more I talked about it, he noticed that I was still freaked out by it.

I continued. “The mother of this girl who ate watermelon seeds who was a widow. They told us that she had a baby soon after but when the girl got married she took the baby with her because the widow was ‘too old’ to take care of the baby.”

I was ready for him to start laughing but he didn’t. He wasn’t even that surprised about that story at all.  He just said, “Wow, that is quite a story.” He thought a minute. “But you don’t still think that watermelon seeds will grow inside your stomach, do you?” he asked.

We both started laughing. I didn’t know where to look, I was so embarrassed as I answered him.

“No, my friends and I figured it out, but every time I see a watermelon seed I think about the nightmares and I just automatically take it out and put it aside, just to be safe.”

I lowered my head as I answered, “No.”

“So what do you think about the quesadillas, do you like them?” he asked.

“They are very good. I haven’t eaten this much in a long time, thank you,” I said.

“So what would you do if Hillary calls you and asks if you want to come back to work at the factory?” he asked.

“I would have to go back to work so I can pay my rent,” I answered.

“I heard that they are getting busier again and they might start calling people back soon,” he said.

“I hope I get to work the afternoon shift if they do call me back. That would be perfect. I could go to school during the day and work at night -- that would be great. Don’t you think?” I asked George.

“Woooo I don’t know, don’t you think that might be a bit much?” he asked.

The beach was getting emptier, most of the motorcycles had left, and the sun was about to set. George asked if I was okay to go for a long ride yet. He said that evenings were his favorite time to ride.

“Make sure you hold on tight because I am going to go faster than I was before, okay?” he said.

When he took off I felt like my stomach stayed behind and the rest of my body went with George. We got to a part of the beach that was hidden. He parked the motorcycle and helped me off. We went for a walk again.

“How are things with you and Bree?” I asked.

“Well, there is no more ‘Bree and I,’ we are so done. I can’t handle her and the drama she brought every time I saw her, it was getting exhausting. I feel so light since we broke up, I can’t believe it went on for this long,” he said. “What about you, do you have any Mennonite breakup stories?” he asked.

“Interesting that you asked. Since we are talking about stuff like this, I feel like I can tell you now. Remember that time we picked up my money from the variety store, and I was a bit weird after you put your arm around me, and I needed a minute to put my thoughts in order?” I said.

“Yes,” he said with a big smile on his face.

I told him about that year and a half ‘relationship’ I was in with the man who put his arm around me because I was too scared to tell him not to come and visit me anymore.

He laughed and said, “No shit, he put his arm around you and that meant that he was your boyfriend? He visited you for a year and a half? Holy shit, that is insane. Oh crap, no wonder you were worried when I put my arm around you. I’m so glad you told me and I’m sorry that I scared you. Around here we put our arms around people who are just friends. People who are just friends even hug.”

I thought, “Wow that is awesome. Now I don’t have to worry about that so much anymore and I can just enjoy this, whatever it might be.”

“Should we get back on the road?” I asked.

I couldn’t wait to get back on that motorcycle and cozy right up to him without any worries. On the way back to the apartment I thought, “This is by far the best day of my life,” I had to fight off thoughts that suggested that it was wrong to selfishly enjoy myself as much as I was.

I secretly wished that my birthday would be on a Friday the thirteenth every year if it would be like thas every time. I wished I had a way to make time stand still and stay in that moment for a long time.

When we got back to the apartment he walked me to my door and said, “I have something for you, I’ll be right back.”

He went to his place and shortly came back with the bookshelf he was building that day when I went over to ask him to write the note in the card for the nurse.

It had a big red bow on it with a card attached to it. He brought it inside and put it down with a big smile on his face and said, “Happy birthday, Anna. Now that you are going to be reading a lot, I wanted to be the one to make you your first bookshelf. Thanks for letting me be part of your special day.”

I didn’t know what to say. I loved it. It was the perfect gift for me. I thought, “This is the perfect time to hug him.” I walked toward him, said “thank you,” and opened my arms, hoping he would respond and give me a hug.

He smiled leaned in and wrapped his arms around me, pulled me in right close to him, and said, “Wow, your French braid is still perfectly intact.”

I was shaking as I put my arms around him. I just held on as long as I could and thought, “I should let go now before this gets awkward.”

I pulled away a bit and he loosened his arms, took a deep breath, and said, “Well, I better get going,” and walked toward the door.

I followed him to the door like a lost puppy.

“Good night, Anna, have a good sleep,” he said.

“Okay, you too, thanks. Good night, George,” I replied

I closed the door and locked it. I immediately put all my books on the shelf and just stood there admiring it for a while. I sat down and opened the card, it said: 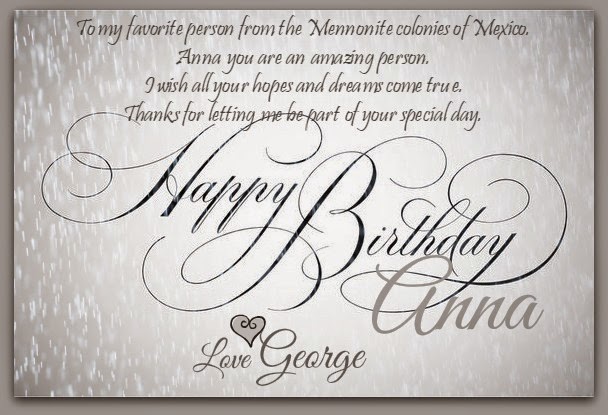 I thought, “I’m not sure what I am, but he sure is an amazing person.”

I went to sleep with the biggest smile on my face. Thanks to George this had been the best day of my life. I was so happy and felt like I was on my way to greatness.

I didn’t have a headache and I fell asleep with my own voice in my head. I didn’t need Enigma to put me to sleep, I was able to it all by myself and it was an amazing feeling. Click here to continue reading my story.

Email ThisBlogThis!Share to TwitterShare to FacebookShare to Pinterest
Labels: My Perfectly Happy Birthday, My Story, The best day of my life