Continued from Sinner Lost in Translation

Life was just beginning for me. I felt like I was on top of the world. I had a great factory job and I had just found an apartment that was not too far from the factory so I could walk to work.

Before I could move in, I had to sign a one year lease. I had never heard of a lease before but I thought, “Sure, I’ll sign it. No problem.” Again, who knew you needed a SIN card for that too but, of course, I already had one of those.  I had used it before so, ¨what’s one more time?¨ I thought. Every move I made I had to be reminded that I was sinning.

I worked all week and on Saturdays, I cleaned my apartment because that is what women do on Saturdays.  I learned that, well, ever since I can remember. I couldn’t imagine what else one would do on a Saturday.

Well, maybe one other thing: my laundry. Back home in Mexico, laundry day was always Monday. I felt so empowered that I got to decide when I did my laundry. I was very hopeful and excited about making my own decisions. What my future would bring … and, how many doors this SIN card would open for me.

Then, about two months after I moved into my very own apartment, I showed up for work all proud and excited to sit in one spot and sew seat covers for eight hours.  Eight hours was a long time to daydream about what I might do the next Saturday and what I could do with the fifty dollars I would have left after paying rent.

Those fifty dollars had to last me until my next paycheque.  I was thinking of how I could maybe get one of those movie players people in Canada called a VCR.

If I had one of those, I could choose what I wanted to watch on the TV a friend gave me.  I could watch two channels if I put some tinfoil on the bunny ear antennas. I wondered if I should take my SIN card to the store to buy this VCR.

Right in the middle of all these pleasant thoughts, I was having about what movies I could watch (after I cleaned and did my laundry, of course), I heard my name being called.

“Would Anna Wall please come to the office?”

My heart stopped for a second or two.  I got up, turned off the sewing machine, and made my way to the office.  I could feel my heart pounding against my chest.

I was shaking so badly I could barely walk.  A man opened the office door and said, “Hi, Anna, my name is Hilary. Please have a seat.” All I could do is think, “Hilary? What a strange name” I had never heard a name like that before but I had never been called to an office either. There were a lot of firsts for me on that one day.

This was so strange. I was not used to a man opening doors for me or using words like, “Please have a seat.”  I sat down and looked at my hands because I was afraid to look up at him. As he started talking, I slowly lifted my head and looked at him.

He was wearing huge glasses that reached halfway down his cheeks, he had a mustache, a haircut short on top and longer at the back, and he had the deepest, manliest voice I had ever heard.

“So, how is that sewing machine working?” He asked.

“So, the reason why I called you to my office is to let you know that we are experiencing a shortage of work and we have to let you go” he explained.

I felt all the blood rush to my feet. I suddenly felt very cold.  He looked a bit worried but he kept talking. “I am really sorry but, because you were one of the last ten people to be hired here, unfortunately, we have no choice but to let all ten of you go. Do you understand what I’m saying?” He asked.

“Ahhh, about every other word. What you mean is that I can no longer work here?” I asked.

“Yes, but as soon as things pick up again we will call you and you can work here again. You are doing a great job. You don’t talk to people and you work fast. That is what we want here” he said.

In the middle of almost having a heart attack, I thought to myself, “If I could speak more ENGLISH, I probably would talk to anyone that would listen to me, HILARY!!”

I thought "what am I going to do now?"

I explained my situation as best as I could to my lunchroom buddies, George the long-haired tattoo man, and the woman that called me a shmuck.

They explored all my options with me, asked me some questions, and concluded that I would not qualify for unemployment insurance for various reasons.  Apparently, I needed more than a SIN card for that.

I thought, “What does that even mean?  Here I go again” My heart skipped a few beats. I was turning white and feeling cold again, I drank some water.

My only option at that point was to go find Wilhelm Fehr and ask for help. I was stuck. I had to stay in that apartment for a year.

I learned very quickly that 'Wilhelm Fehr' (welfare) sure didn't even give out a lot of money to live off of.  I didn’t even get enough to cover my rent.

What the heck was I going to do? I could barely speak English, let alone read and write it.

There was no other job out there for me.  I thought my life was over.  I felt like this world would have one less problem if I just didn’t exist.

I thought the reason I felt so low so often surely must have something to do with the fact that I was, after all, Low German.  I couldn’t believe that life was imitating the way I had felt most of my life.  When I started working at that factory I felt like I could learn to take care of myself and that was all I wanted.

I couldn't believe that my dream was so short-lived.  I was on top of the world and so hopeful about building a new life for myself in Canada, where I was the one in charge.  Then, just like that, five minutes in Hilary’s office and that dream was gone.

My Low German thoughts were telling me Hilary was just saying that I might get called back to give me a bit of hope to hold on to so I wouldn’t pass out right there in his office.

I felt like such a useless waste of a human being. I had no purpose, nothing to look forward to.  I felt like I had nothing to live for anymore.  I began to have thoughts of ending my life like my grandfather did.  Click here to continue reading my story. 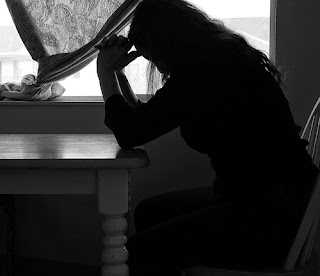