Growing up in the strictly religious Old Colony Church, it was often confusing to know exactly which rules had exceptions and which ones didn’t. For example, The Mexican Old Colony church did not allow its members to drive cars. But if someone went to Canada, came back to Mexico with a van and parked it in their garage, that was allowed. As long as they left it parked until they went back to Canada.

I remember people talking about how unfair they thought it was that sometimes change was allowed but other times it wasn’t.

The rules about driving cars were complicated. For example, there were colonies that were too far to get to in a horse and buggy. In these cases, people would have to hire a Mexican driver to go there if they needed to.

Our relationship with the Old Colony Church in Canada was complicated, too. Most parents didn’t want their kids to date people who had been to Canada because chances were that they would leave the Church in Mexico and join the one in Canada. It rarely happened the other way around.

During my years living in Mexico, the Old Colony church was against its members going to Canada at all. However, many people had no choice but to come to Canada because of hardship and poverty in Mexico. Eventfully it was okay to go and work in Canada for the summers as long as people maintained the way they dressed.

Even if people attended the Canadian Old Colony church, as long as they didn’t join the church in Canada they were still Mexican Old Colony. After that had become the norm, then more and more people would end up staying in Canada all year round, not attending church at all. Then they were considered the ones changing too much and living in sin.

I remember the ministers in Mexico speaking out against the fact that too many people were not attending church at all, or joining the Canadian church, and that that was a sad reality. People were encouraged to just stay in Mexico so they wouldn’t be tempted to change like the ones who decided to stay in Canada.

It was often said that people would join the Canadian church just so they could drive cars in Mexico without getting in trouble for it. Each time someone came back from Canada they had changed a bit more. I remember the year when a few women brought back the most beautiful dresses. They had pleats all the way around the skirt, not just in the back like they were supposed to.

In the Mexican Old Colony church we had to wear a black apron over our dresses which had pleats only in the back. Every female had to have their hair in braids and wear a big black düak (shawl/kerchief) with fringe around it in church. 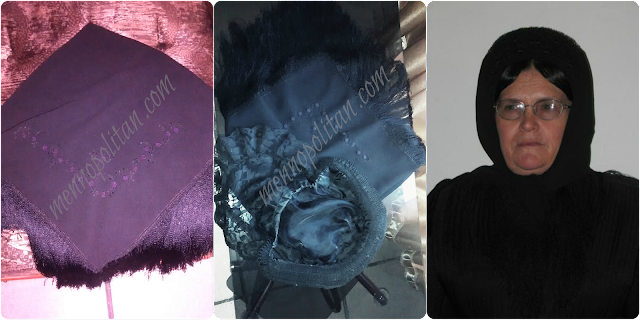 The first Sunday after a woman had her first baby was the only time she was allowed to bring her baby to church. That Sunday she had to start wearing the mats (described below) in church, to funerals and to weddings. Children were not allowed to attend church until about the age of ten or when they were able to sit like a robot.

The mats is a beautifully handcrafted headpiece made out of layers of lace stacked up about two inches high. Women wear this under their düak just so that the layers of folded lace peek through and show on top of their head.


By contrast, In the Canadian Old Colony church women didn’t have to wear the mats -- it was their choice if and when they started wearing one. Some of the ministers’ wives even chose not to wear a mats and just wore a small düak  in church.

Some parents in the Canadian church would allow their young girls, even already-married ones, to wear their hair pinned up in a hairnet and a little black düak. All ages of children were allowed to attend church, even wearing a ponytail or a bun with no düak, and robot behaviour was not as expected of the children in the Canadian church as it was in the Mexican church.

In Canada, some young girls would wear short-sleeve dresses that had pleats ironed into the front of the dress as well as the back and not wear a black apron with it. They would even wear white socks in the Canadian church. In the Mexican church that was not allowed. We had to wear long sleeves, pleats only in the back of the dress, with a black apron and dark brown or black nylons. 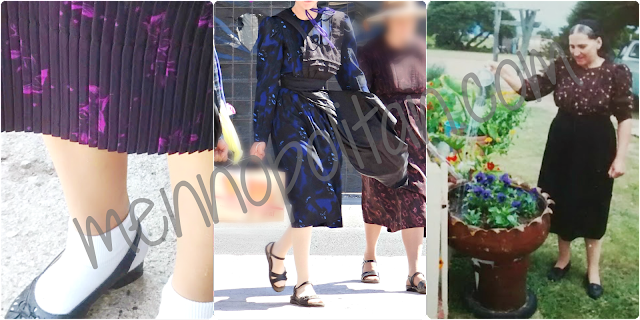 In the Mexican church, the older a woman got, the wider the pleats had to be in her skirt. The colour of her nylons and dress had to get darker and darker as she aged. After a woman became a grandma she would wear a lint-schaldüak (waist apron) which didn’t have the top part of the apron on it, just the bottom part. In the Canadian church a women could choose whether they wanted wear a lint-schaldüak or not.

In the Mexican church, church services, wedding ceremonies and funerals were all in High German only. In the Canadian church, these were all done in a combination of both High German and Low German/Plautdietsch. Old Colony people singing.

When I attended a Canadian Old Colony church, I felt welcomed for the most part. I did get the occasional side stare by someone who knew of me and considered my lifestyle a sinful one. It brought tears to my eyes when I actually understood the sermon because it was in Plautdietsch -- that was the language I spoke and understood. I had never experienced that before.

I got the sense that the focus on the message in the Canadian Old Colony church was a bit more about how one acted than how one dressed. Dressing church-appropriate, wearing a head covering, and not showing too much skin was still promoted. It wasn’t so much about pleats, big or small düak, an apron or lint-schaldüak, and the mats.

This was not the case in the Mexican church. From the little I understood, the focus was more on dressing and not allowing change to happen. But many things were said in High German that I didn’t understand, therefore I can’t say that this is entirely true.

Now that I have read a mountain of books on the history about why my people left Canada, I am beginning to get a clearer picture of the battle between the two churches. It has always been about keeping things the way they had been. I understand the fear for when small changes were allowed, because how many small changes could happen before it become a big change?

“The main reason most of the Old Colony Mennonites left Canada, where they had settled a mere half a century earlier, might best be summed up by words of Old Colony Mennonite Bishop Isaac Dyck: ‘When the school, as the first plating place in man’s heart, was held in common with the world, then the church also couldn't remain free from it.’”1

“The Old Colony believe ‘ji meha jiliehet, ji meha fitchiehet’ (the more learned the more misguided). The Mennonites felt cheated by the government, who, in their eyes, was not keeping the promises that had been made to the Mennonites before they came to Canada.”2

Allowing children to go to a public school was a change they clearly didn’t want.

“The leaders’ plan was to move the entire church to Mexico.  But not all the Old Colony people made the move.  Some did not see the Canadian school laws as a threat.  Others were too poor to move.  Ministers returned to Canada to hold communion services until 1926.  Eventually, all the ones remaining in Canada were excommunicated.”3

One of the Old Colony ministers who was involved in the decision to move to Mexico was my great grandfather Johan P. Wall. Among the people on that train to Mexico were both my paternal grandparents, as well as my great-grandfather and grandfather -- both named Abraham Schmitt -- on my mother’s side.

While researching where I fit into the timeline, tracing my family tree back to Russia, I learned this piece about my great-grandfather. I was so disappointed, mostly in myself. The thing that saddened me the most was that he had made such a huge sacrifice to save us from being “misguided” and I didn’t even know about it. In order to avoid being “misguided,” we hadn’t learned anything about many subjects, including history . . . even the history of our own people and families.

The Old Colony people who stayed in Canada ordained new ministers and continued life in Canada as a separate church from the one that left. By law they were supposed to be sending their children to a public school until grade eight. This didn’t happen overnight as this change was not easy for some Old Colony people. Though they stayed in Canada, it didn’t necessarily mean that they agreed to send their kids to a Canadian public school.

While I was searching for information on my great-grandfather Abraham Schmitt on my mother’s side, I came across an autobiographical book entitled Brilliant Idiot by a Dr. Abraham Schmitt. From the story, I learned that during that time of great upheaval, the author’s father was about to marry a girl whose family was too poor to move to Mexico. Because of that, he was the only Schmitt out of that family to stay behind in Canada. I believe he might be my great-grandfather Abraham Schmitt’s cousin.

In this book, Abraham describes life as he grew up in Canada. It sounds about as hard as -- if not harder than -- it was for the people who went to Mexico and started a brand new colony in the Mexican desert. He talks about how families, including his, moved further into isolation so the “English people” wouldn’t get them in trouble for not sending their kids to public school.

I’ve often wondered how different my life would have turned out if my great grandparents and grandparents had stayed in Canada. After reading Brilliant Idiot, I realized that it may have been different but not necessarily better. He was a “hard learner” just like I was. While on his quest to find his way in life, he discovered that he in fact was dyslexic and wrote a book about it.