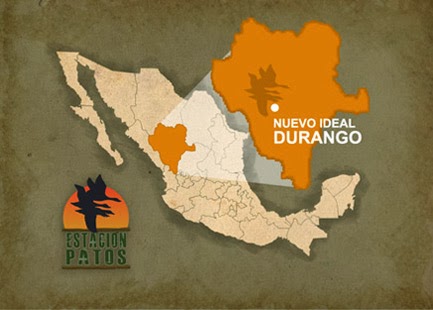 This image is from http://estacionpatos.com.mx/images/mapamex.jpg


March 1, 1922, the first train with Old Colony Mennonites emigrants left Canada for Mexico.  Houses were disassembled and loaded onto the train cars, along with farm machinery and animals.  The train made tow stops a day to feed and water the stock and milk the cows.  The water was taken along in tank cars.  Thirty-six trains, hired at about $25,000 each, left Canada from 1922 to 1924.  During that time, more than 6,000 Mennonites left the rich Canadian prairies for the semiarid desert land in northern Mexico.

This image is from http://media.away.com/gifs/location/latamer/mexico/mex_nort.gif

The leaders’ plan was to move the entire church to Mexico.  But not all the Old Colony people made the move.  Some did not see the Canadian school laws as a threat.  Others were too poor to move.  Ministers returned to Canada to hold communion services until 1926.  Eventually, all the ones remaining in Canada were excommunicated.

Even though the villages were laid out before the move and the families had decided how much land they would buy and which village they were going, few really understood what type of land they were going to.  The first settlers arrived in March before the rainy season, and feed was not available for the cattle and heavy Canadian horses.

The first attempt at growing wheat failed in Mexico.  New farming practices and growing crops such as beans and oats had to be learned.  Bountiful crops grew when the rain came, but during the 1920s, there were several years of drought.  The pioneers survived, but it was difficult.

The Mexican Revolution had officially ended, but roving bands of Poncho Villa’s army raised the villages.  A number of Mennonites died at the hands of Mexican attackers.  Finally, troops were brought into the aria for protection.  Malaria, typhus, and smallpox also took their toll, as the nearest doctor was fifty miles away.

The Old Colony people had a hard time communicating with their Spanish neighbors.  It is hard to imagine the hardship the Mennonites including my great grandparents had to endure as they cleared the land and built villages in a strange country with a different climate. During this time, my grandparents from both sides were small children.

But here in Mexico, they found the freedom to live their faith and lifestyle similar to that of their forefathers in Russia.  Their churches, their schools, and their village affairs were entirely left up to their control. Here they were an isolated group among natives with whom they couldn't communicate.  To the leaders, this appeared to be a protection from the world.

Credits go to a beautifully written book (Called to Mexico.)