Part one: Low German Mennonite History. From the Netherlands to Poland

Tracing the steps of my ancestors back as they began seeking religious freedom and Catholic priest, all the way up to 1540s in the early 1540s the Anabaptist movement in the Low Countries along the North Sea had become under the influence of Menno Simons, a former Catholic priest.  He faced severe persecution along with his followers known as Mennonites.  "What is a Mennonite?" explains how this happened.)

The severe persecution caused the Anabaptists to look for a place where they could live their faith without the threat of torture and imprisonment.  To many Mennonites, Poland seemed to be the answer.  A huge number of the Polish population had been wiped out by the plague.  Rich farmland in the Dazing region along the Baltic Sea was flooded and in ruins.  This appeared to be a land of opportunity and a large number went there by boat from the 1530s to 1600.
Dutch businessmen hired the Mennonites to build dikes and to drain the lowlands along the Vistula and Nigot River deltas in northern Poland.  This was not new work to the Mennonites, who were used to building dikes in Holland.  Draining the land, which was from three to seven feet below sea level, was no easy task.  Swamp fever was a serious problem and over half of the first settlers died.  With time, the swamps were turned into rich farmlands.

Because of their valuable contribution to the country, the Mennonites enjoyed limited freedom in their early years in Poland.  However, they were not granted citizenship rights nor were they allowed to build their own church houses.  The Mennonites met at their homes, where services were held in the barns and sheds.  During this time the bishop, ministers, and deacon leadership was organized.  Menno Simons visited the region in 1542 to help resolve a church dispute. 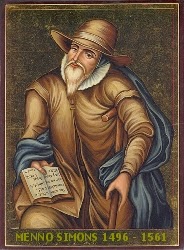 In 1642, King Wladislaw IV of Poland demanded an annual sum of money from the Mennonites in exchange for the right to live in his country.  They were also allowed to have their own schools, which was wary important to them.  The right to build plain, simple church houses was granted around 1750.  By this time High German had replaced the Dutch language for church services.  The Bible had not been translated into their everyday Low German (Plattdeutsch).   There is more on the history about the language in my post (“why is it Low German?”)

By now the several Polish surnames like Sawatsky, Rogalsky, and Pankratz were found among the Mennonites. Not enough land was available to support the growing farming communities, and many Mennonites became merchants, weaver, and artisans.

War broke out, and in 1772 the country of Poland was divided among Prussia, Russia, and Austria.  The Mennonites were now under Prussian-ruled government, laws were passed to keep them from purchasing more land.  Military exemption was granted only after large cash payments were made.  The state did not recognize the Mennonite ministry and did not allow them to preach on public grounds.

This meant a Lutheran minister would have to attend Mennonite burials, as the cemeteries were public ground.  To avoid this, some Mennonites established family burial plots in their front yards.  Neither did the state recognize marriages performed by the Mennonite ministers.

Unreasonable tithes were demanded by both the state and Lutheran Churches.  For many Mennonites, it didn’t appear as if Prussia held any future for their church.  It was time to seek another country, as their ancestors had done over two centuries earlier.  In the late 1780s, when Catherine the Great invited them to farm the steppes of the Ukraine, many Mennonites felt that God was answering their prayers. Click here to continue reading Part two: Low German Mennonite History. From Poland to Russia the Ukraine.

Credits go to a beautifully written book (Called to Mexico.)
at 3:30 PM